Building upon 150 years of history in lens discovery and refinement, Zeiss combined their prowess in imaging software and superior lens production, along with their well-known capability for innovation, and developed binoculars that can determine the location of an objective to within one yard at a distance of 2500 yards, almost one-and-a-half miles. Zeiss has not only devised this amazing instrument but also developed accessories and software that simplify and personalize the use of the RF 10×42. In this review, we’ll have an opportunity to unpack the importance of this technological advancement, examine its specifications, and hear how it works in the field, as well as how its performance has been evaluated. 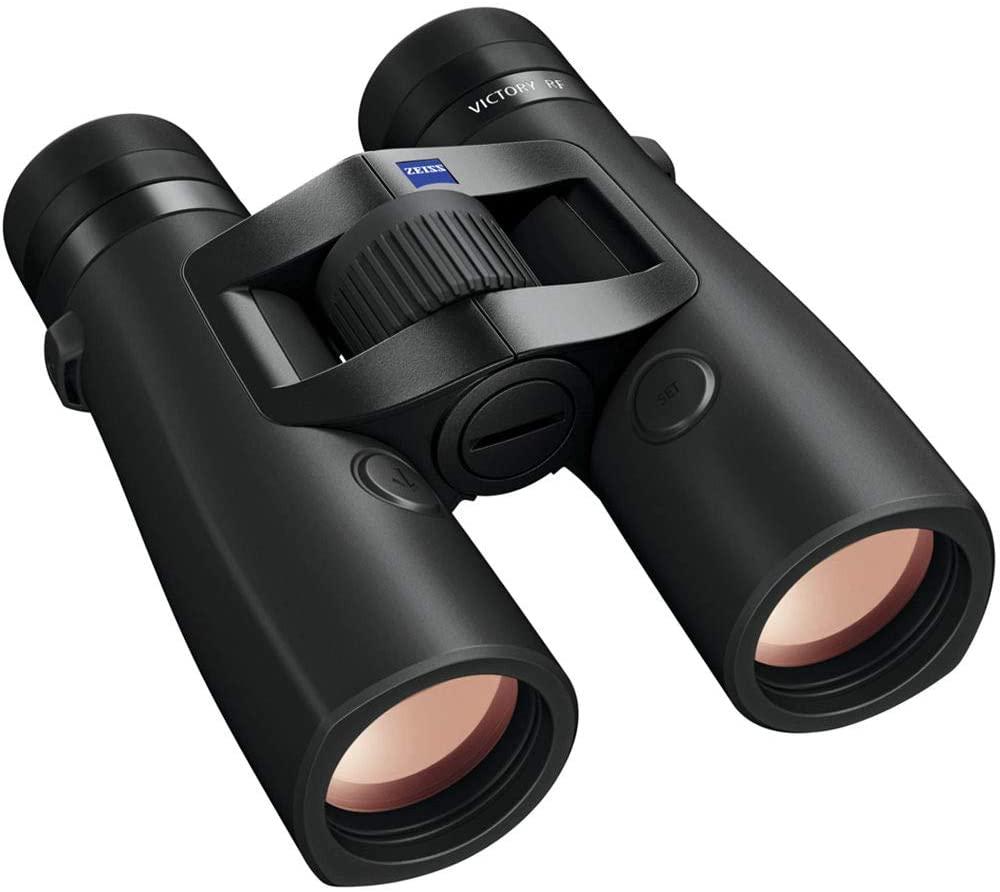 Imagine for a moment that you are a hunter and there is a buck you can barely see with the naked eye walking across a distant hillside. At the great distance, you are uncertain of how far away the animal is. You cannot evaluate it to determine whether it’s worthy of your time—you’re really just interested in a trophy animal. Because the distance between you is sloping and you’re not on the same plane, you aren’t sure, even should you know the line-of-sight distance, what the actual distance was to the target. Not only that, but there is a steady crosswind that will impact any shot as well. In generations past, your only hope in such a situation, if you didn’t just give up, was to attempt a stealthy transit toward the buck, hoping it didn’t hear your approach or just wander away.

Fortunately, things are different for the long-range shooter today. Take for instance, if the hunter has Zeiss Victory RF 10×42 binoculars. First, this state of the art device contains some of the finest magnifying lenses and time-tested prisms ever devised. Gazing through the binoculars, the hunter would easily see the buck, determine its worth as a trophy, and thanks to the contrasting ability of the RF 10×42, see additional deer nearby. Other fine binoculars and spotting scopes also have this ability. The RF 10×42, however, has a built-in laser range finder that can determine the exact distance and slope to the target. Then, using the Zeiss ballistic app, the hunter can determine the necessary BDC (bullet drop compensation) calibration, compensate for the wind, and adjust the riflescope reticle to make a perfect shot. This is the difference RF 10×42 binoculars can make for the hunter. 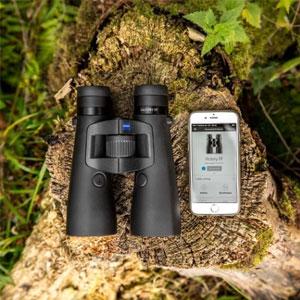 It’s somewhat deceiving to consider the RF 10×42 as a solitary device. Rather, these binoculars are designed to be an integral part of an entire ballistic hunting system, one that works best when the hunter downloads the pertinent Zeiss apps into his smartphone, and enters his DOPE (data on previous engagement—essentially a record of his sighting and shooting) information. With this programmed into his Bluetooth enabled phone, he can take the range information provided by the RF 10×42 and know that he can make an accurate shot to the effective range of his rifle and ammunition. Zeiss carries the process a step further with the special ASV rifle scopes they have developed to simplify the process of calibrating long-distance targeting. This entire, amazing process, however, is contingent upon two technologically advanced devices contained in one pair of binoculars.

Sleek and deceptively simple-looking in appearance, the RF 10×42 not only contains some of the best glass ever produced for binoculars but also a laser and laser sensor, and an onboard computer capable of translating the information the binoculars receive into actionable data instantaneously. The RF 10×42 has sensors to detect air pressure and temperature. With an angle sensor, it can calculate both horizontal and line of sight distances.

Before the hi-tech stuff, however, it’s important to know that the RF 10×42 is first and foremost a superb pair of Zeiss binoculars. Thus, it isn’t surprising to find that the housing is made of armored magnesium, so the frame will be both lightweight and extremely rugged. The lenses are made of fluoride glass and coated with several propriety Zeiss emulsions including T* anti-reflective coating and LotuTec hydrophobic coating. The superior light gathering ability of the objective lenses makes sighting in low light possible. As with other Zeiss glasses, the image is flat and clearly in focus from one side of the image to the other. The binoculars have a center focus wheel, in front of which is the battery compartment that can be opened with a coin. There are two diopters to allow either eye to become adjusted to fine focus. The RF 10×42 has adjustable eyecups that are suitable for the unaided eye as well as for those who wear glasses. The binoculars are waterproof in up to 12 feet of water for two hours.

A great deal of effort went into designing the body of the RF 10×42 to be as ergonomic and intuitive as possible. The device’s controls are intentionally ambidextrous and simply operated, with one-touch ranging. Like other Zeiss products, the focus wheel is proportionally larger, which diminishes the chance that focusing will result in jostling the binoculars. On the bottom of the housing are two buttons that activate the range finding function. The user can switch the default button as they prefer. Once the range-finding button is pressed, the RF 10×42 goes into a scan mode and remains in scan until the button is released. When the user finds a desired target during the scan mode and releases the button, the range of the target is given instantly.

The most intriguing aspects of the device are also the most technologically advanced. Built into the RF 10×42 is BIS II, an information system that provides ballistic data to the user. Much of what the RF 10×42 does is automatic, for instance, it has 11 built-in LED brightness settings. However, it also allows the user to override the automatic function and manually determine the desired brightness. To use the full capacity of the RF 10×42 and its software, the user can load up to nine personal profiles into the Zeiss app. These profiles correspond to different weapon and munition choices, from which the RF 10×42 can pull the correct data at the moment the user requires it. Unlike other range finding devices, the RF 10×42 does not require an SD card. The personal preferences of the user are in the memory of the binoculars.

Once the user has purchased the RF 10×42 and started the simple process of preparing it for the range or field, the next step is to download the Zeiss hunting app. This is assuming the purchaser wants to use the app. Even without the app, the binoculars work perfectly well as laser rangefinders. If the software assist is desire, the binoculars are paired with the smartphone and the user’s data is entered. Some additional preparation is required of the user, for instance, sighting chosen rifles in at 100 yards to establish a default zero distance. Having accomplished that, the smartphone is no longer necessary; the RF 10×42 does all the work. Zeiss is willing to work for the user as well. If the rifle or the type of munitions is not listed as one of those available on the app, the user can report this to Zeiss and they will update the software quickly.

Here are the specs for the Zeiss Victory RF 10×42 ballistic binoculars:

The RF 10×42 comes with a user guide, two carrying straps, lens caps for the ocular and objective lenses, and a carrying case.

As is commonly the case with Zeiss products, those who have used the RF 10×42 report that it lives up to its promise. The laser range finding capability is listed as effective at an amazing 2500 yards, which has been demonstrated to be accurate. The quality of the image is described as being superior to other binoculars with similar magnification and objective lenses. Those who have taken the RF 10×42 to the range and utilized the BIS II software have reported that the ballistic software has yielded accurate data, allowing first shot impacts on targets at 900 yards. It should be noted that archers can also use the rangefinders and input their necessary data for targeting results, just as do rifle hunters. 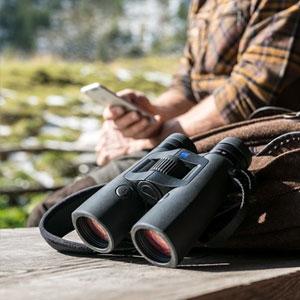 Several hunters have expressed that the RF 10×42 simplified their preparations and the actual hunt itself by allowing them to consolidate two devices, a scope, and a rangefinder, into one. Others expressed that the rangefinder function of RF 10×42 was much simpler and more accurate than trying to determine the distance to a target through a scale in a reticle riflescope. The versatility of the rangefinder was mentioned as well, in that it will provide data to a hunter using MOA, MRad, or inch calibrations in a riflescope.

Another topic users have mentioned regarding the RF 10×42 has to do with its value. A high-end device, satisfied users are quick to mention they find it to be worth the expense. This seems to be particularly the case the more the rangefinder is used. Some users have gone to lengths to compare the RF 10×42 to other laser range finders, in doing so explaining the great technological upgrades available in the 2018 Zeiss RF 10×42. More than one user has commented on the sleek appearance of the binoculars, which belies its amazing capabilities.

Of course, no device, not even a pair of Zeiss range-finding laser binoculars, is perfect. There have been some critical comments. One user noted that the binoculars have no built-in platform from which they can be attached to a tripod. Some users would find it helpful to steady their hands when ranging. Another user expressed a desire that a wind sensor could be included in the RF 10×42 along with the temperature sensor. While the software has a windage function, the binoculars themselves have no way to judge wind speed.

Carl Zeiss Sports Optics’ long history of innovation and technological leadership has been demonstrated once again in the form not only of the outstanding Zeiss Victory RF 10×42 ballistic binoculars but also in the systematic long-range sighting process that has been established. Apart from the BIS II ballistic program, the RF 10×42 is a topflight pair of binoculars and, apart from the superior quality of the binoculars, the RF 10×42 is an outstanding, far-reaching laser rangefinder. When the binoculars, laser rangefinder, and ballistic software are combined, we are once again transported to the astonishing world of Zeiss innovation.

Quite apart from the theoretical element of what Zeiss has accomplished, archers, target shooters, and hunters in the field have already expressed great enthusiasm for these new tools that have so simplified targeting tasks that were once virtually impossible. Where hunters once needed luck to successfully impact a target at great distances, the RF 10×42 not only can help you hit the target but also tell you exactly how far away it was.