Zeiss had been the leader in high quality, and high price, binoculars. When it launched Terra entry-level binoculars, led by the ED 8X42, it began a revolution in budget-priced glasses.

Zeiss Sports Optics had been at the forefront of high-end binoculars literally for 150 years, dating back to the late 1880s when the Germany company produced its first pair using the legendary Abbe-König Porro prism—a design it still uses today in its best binoculars. The binocular world was turned upside down in 2013 when Zeiss introduced its Terra series that now numbers half a dozen entry-level glasses.

The flagship binoculars of the Terra series is the ED 8X42 model. So startling was the introduction of the ED 8X42 that reviewers, testers, and hobbyists rushed to try it and report on whether or not the upstart Terra series of field glasses measured up to the surpassing historical quality of the touted Zeiss brand. This review will take a look at Zeiss’ introduction of the ED 8X42, examine its specs, listen to reports of how it tests out in the field, and hear from those who have reviewed it.

It would be difficult to imagine an event that could result in more turmoil among those hunters, nature lovers, birders, and other hobbyists who regularly rely on binoculars than the introduction of an entry-level brand of binoculars by the fabled Zeiss Sports Optics. In the second decade of the 21st century, there seemed to be a sea change in the attitude of this 160-year-old producer of some of the finest optics in the world. Previously content to produce superior lenses at superior prices, Zeiss announced the introduction of the Terra series of binoculars. Everything about these binoculars was a complete reversal of how Zeiss manufactured and promoted their binoculars—well, almost.

For the first time, Zeiss shipped the production of a sports magnification product out of its native Germany. While the design of the Terra binoculars came from Zeiss, the glasses were made in China. In another startling departure from its tradition, the new Terra binoculars used a “roof prism” design called “Schmidt-Pechan.” The truly astonishing aspect of this development was that the binocular prisms Zeiss had always used, a style called the “Porro prism,” had been designed by one the founders of the company. Called the “Abbe-König prism,” even though developed in the 19th century, the Zeiss company still uses the design in its very best binoculars.

Zeiss came to believe, or so it has been speculated, that creating an exceptionally worthwhile series of budget-priced binoculars would create a legion of new devotees to the Zeiss brand, who would in time work up to the mid and high-priced versions of Zeiss binoculars. The challenge before them was to make a new series of glasses that were affordable enough to draw in large numbers of new purchasers and good enough to spoil those new users so they would not want to revert to lesser brands, while at the same time not demeaning their top-flight products.

Moving production to China, creating a new compact series of binoculars—including using an altogether new refraction design—were all part of the Zeiss plan to introduce binocular users to the production values of the long-time industry leader. And it worked. A half dozen years have passed since the introduction of the Terra binoculars, led by the ED 8X42. They continue to receive stellar ratings and to raise the expectations of those who regularly use binoculars. 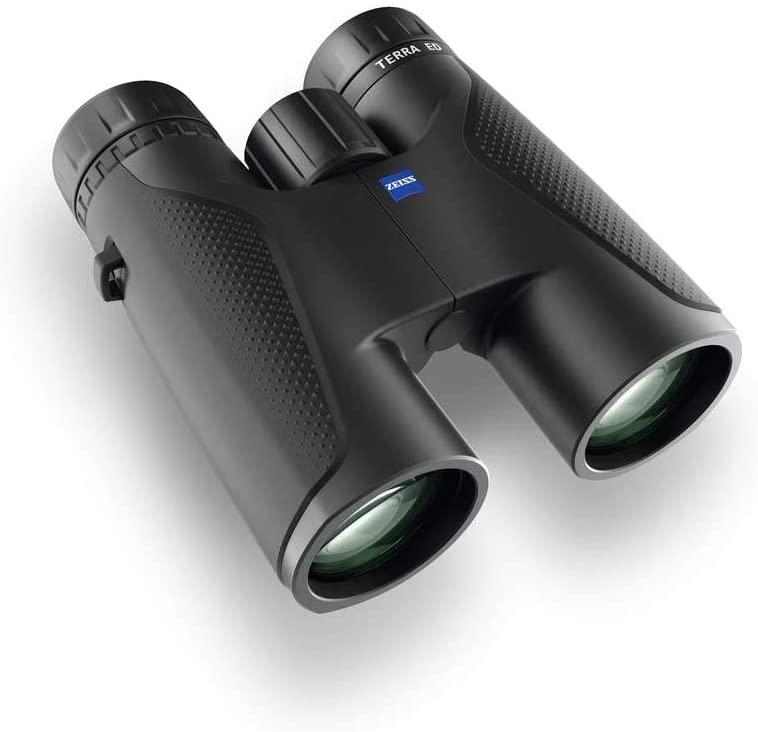 As users will attest, the ED 8X42 fits comfortably in the hands, so much so that it can be used for hours without fatiguing the body or the eyes. It’s attractive, lightweight, and compact. The body is made of a polyamide substance, similar to the materials used to make Kevlar—and covered with rubberized armor, to keep the glasses light and incredibly durable. While the body of the binoculars is small, the focus wheel is not. Ergonomically placed where it can be turned easily, it has a smooth and very rapid action, bringing objectives quickly into focus. The diopter adjustment, on the right tube housing, is quite simply designed with a rubber knob.

Proprietary lens caps come with the ED 8X42, both for the large, light-gathering objective lenses as well as the eyepieces. The adjustable eyecups have four preset stopping point to make them particularly accessible for both the unaided eye and for eyeglasses. While the binoculars may have been assembled in China, the glass used in the lenses is famous, quite expensive Schott ED (extra-low dispersion) glass, produced only in Germany by the Schott company. The glass is coated with several emulsions that result in it being smudge and dust resistant, as well as making it “hydrophobic,” causing water to bead and immediately fall from the lens. The result of incorporating these Zeiss processes into the manufacturing of the ED 8X42 is a wonderfully bright, color-true, high-contrast image. To maintain true color imaging, the internal roof prisms are phase-corrected by placing multiple dielectric coatings on the prisms. So often what seems to be lack of focus in binoculars is light colors that are out of proper phase. The light-gathering ability of these binoculars is such that looking through them in low light reveals astonishing sights the unaided eye will simply never see on its own.

The binocular housing is filled with nitrogen to prevent internal fogging at any temperature. The glasses are waterproof to the extent that they can be submerged. They are also weatherproof, able to function perfectly from 5 to 140 degrees Fahrenheit.

Here are the specs of the Zeiss Terra ED 8×42 Binoculars:

Included with the ED 8X42 are a user’s manual, cleaning cloth, a neoprene strap, and a rain guard. Several accessories are also available from Zeiss for the binoculars. These include a soft carrying case, additional carrying straps, a tripod adapter, and support suspenders. Of course, the ED 8X42 comes with a limited lifetime warranty, as well.

In reporting about their experiences with the binoculars, users of the ED 8X42 frequently make the comment that these glasses are moderately priced, but doing a high-end job. There is ample proof of that contention in that the Terra line of binoculars won the 2017 Audubon Society award for best binoculars priced between $250-500. Many users lingered on the successful transition Zeiss has made in bridging the gap between top-end and budget field glasses.

Beyond the financial aspect of the ED 8X42, there was a consensus among users that the binoculars produce crisp, true images. They are gifted at light transmission so that low-light conditions are an opportunity to display their best abilities. These binoculars are anecdotally—and also by specification—largely superior to virtually every other brand of binoculars in their class.

In addition to the clarity of the image, users were impressed with the overall ergonomics of the binoculars. They were of such a compact size, it was often noted, that they could be slipped into a pocket. When lifted to use, their design, weight, and hand-feel tended not to induce fatigue. The eye relief and the design and adjustability of the eyecups also tended to prevent eye fatigue, even when the binoculars were used for a lengthy period.

Another favorite practice of ED 8X42 users was to compare the new Zeiss Terra line of binoculars to previous glasses they had used. These comparisons took two forms: comparing the ED 8X42 to more expensive binoculars of top-ranked brands and comparing them to other binoculars in the same moderate price range. A frequently made comment was that, compared to using much more expensive glasses, not much in quality was lost when using the ED 8X42. There were qualitative differences noted between the ED 8X42 and much higher rated binoculars. These observations, however, only seemed to reinforce the awareness of the value present in the ED 8X42. 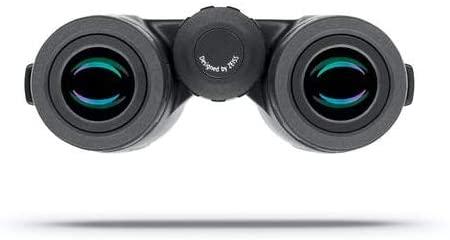 Finally, it should be noted that the glasses were small enough and comfortable enough that many users carried them to events where binoculars are not always used. Not only sporting events and outdoor concerts, but users often took them along to plays, indoor concerts, and walks in the park. Some reported simply carrying the ED 8X42 as a regular part of their routine, just waiting for something interesting to look at.

One purchaser commented that, since the binoculars were given as a gift for a husband, the wife never had the opportunity to use them and was looking forward to buying a pair for herself. The admiring tone of her remarks does a good job of capturing the essence of remarks made by quite a few reviewers. The ED 8X42 was repeatedly complimented for the quality of the images it produced and its ease of use. The intuitive focus control, the compact nature of the device, and the ability to use it comfortably were all leading topics among comments shared.

Several users discussed how the ED 8X42 measured up to previous brands of binoculars or previous experiences in using field glasses. Having purchased the ED 8X42 and another mid-range optic, one user tried both and summarily returned the other brand and kept the Zeiss.

Quite a few users identified themselves as bird watchers or natural world admirers. Some indicated that they had never been birders and only became interested after seeing all they had been missing through the ED 8X42.

Many users report that their assumptions have been challenged through the purchase and use of the ED 8X42. Some confessed difficulty in believing that a device made in China, even with the Zeiss label, could produce the fabled quality they had experienced with previous Zeiss products, only to recognize the excellence and value of the ED 8X42 after using it. Others expressed the sentiment of relief, after trying the ED 8X42 binoculars, to find that Zeiss had not sacrificed its commitment to fine workmanship and state of the art technology.

This is not to say that there were no negative comments about the binoculars. One reviewer expressed dissatisfaction that there were no gradients on the diopter, meaning that a user might have to go through the process of finding the proper setting repeatedly. Others were critical of the simple soft carrying bag that arrives with the ED 8X42, expressing a belief that it should have an accompanying carrying case.

Zeiss Sports Optics took the risk several years ago of producing a new series of entry-level binoculars, the Terra line. The standout of the Terra line is the ED 8X42. Received with trepidation by binocular enthusiasts, the ED 8X42 has quickly proven itself as yet another outstanding example of high-quality workmanship and design. Using the finest ED glass and a new roof prism design, Zeiss bravely departed from its traditional promotional methods. The success of the Terra binoculars, and in particular the ED 8X42, has not only confirmed the new direction of Zeiss but placed the impetus on other top-ranked lens producers to follow suit and create introductory lines for those who are budget conscious.