For a high-quality, mid-price spotting scope meant for viewing or digiscopy, the Zeiss Conquest Gavia 85 does everything well. It gives crisp optics, a light frame, and dependability.

Binoculars are great—but only to an extent. As every nature lover, hunter, and birder knows, even field glasses with 12X can’t always give enough detail of a target objective, or the necessary field of view for scanning a setting. The next step up for the committed enthusiast is a spotting scope. Starting at 15 or 20X, yielding a much wider field of view, and gathering enough light for early morning or late evening viewing, the spotting scope is a default tool for those who are dedicated to their avocations.

An outstanding choice for a spotting scope and one that has exemplary quality, a great number of highly functional features, and recommendations from a wide range of users is the Zeiss Conquest Gavia 85 spotting scope with the 30-60X 85-millimeter ocular lens. This review will take a close look at the Gavia 85, examining its origins and its specs and its best uses before hearing how it functions out in the field.

What an understatement it would be to say the Zeiss Conquest Gavia 85 comes from a heritage of the finest lens producers in the world. The story of the Gavia 85 began more than 150 years ago when a young man named Carl Zeiss opened an optics shop in Jena, Prussia. His first major accomplishment was a compound microscope so finely produced that he sold 1000 of the instruments in a few years. Soon afterward, he joined forces with a physicist and chemist. Together they began to make advances in the theory of light refraction and coated glass. Their work together inspired them to branch out in a great many directions. 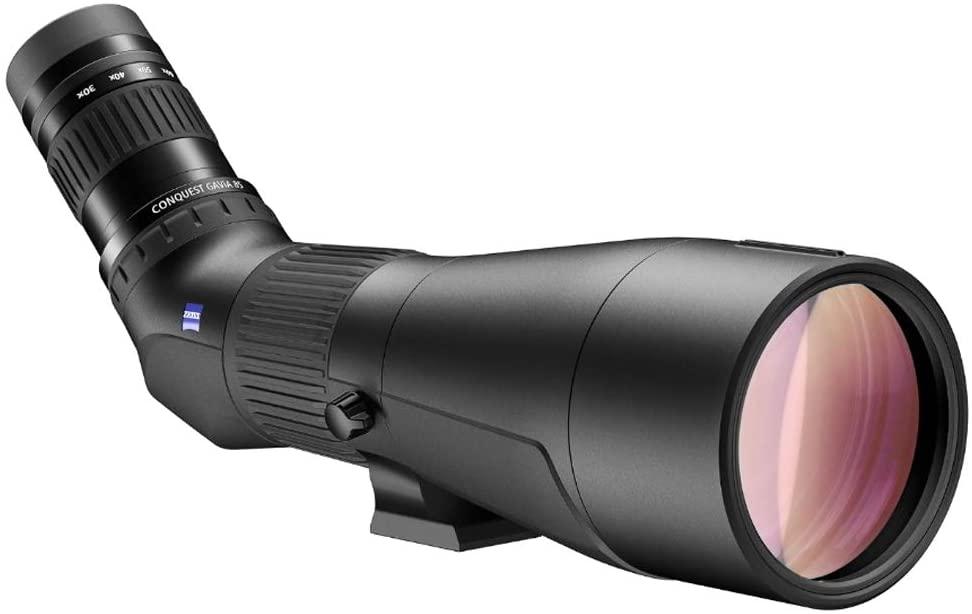 By the 1880s, Zeiss and his colleagues were beginning to use their expertise to create new instruments that were primarily intended to improve their work: refractometers and spectrometers. Once they began to recognize the possibilities of the advances they had made, the Zeiss team expanded into making many different optical devices. Zeiss telescopes, rangefinders, camera lenses, and binoculars began to be mass-produced. The technological expansion of the company created a great need for craftsmen so that by 1914 Zeiss employed more than 5000 area workers. While the turbulence of the first half of the 20th century was incredibly disruptive to the company and its efforts to continue innovating—even resulting in Zeiss being broken up between East and West Germany—by 1995 the entire company had been reunited and had recovered the curious, innovative spirit instilled within it by Carl Zeiss.

Today, Zeiss is an international company still headquartered in Jena, Germany, and still dedicated to technological research and innovative advances. The corporation provides state of the art products for health care, astronomy, eyeglasses, cameras, projectors, semiconductors, and imaging software. Most importantly, they are a top producer of some of the world’s finest spotting scopes, binoculars, and rifle scopes.

Everything About the Zeiss Gavia 85 Speaks of Quality 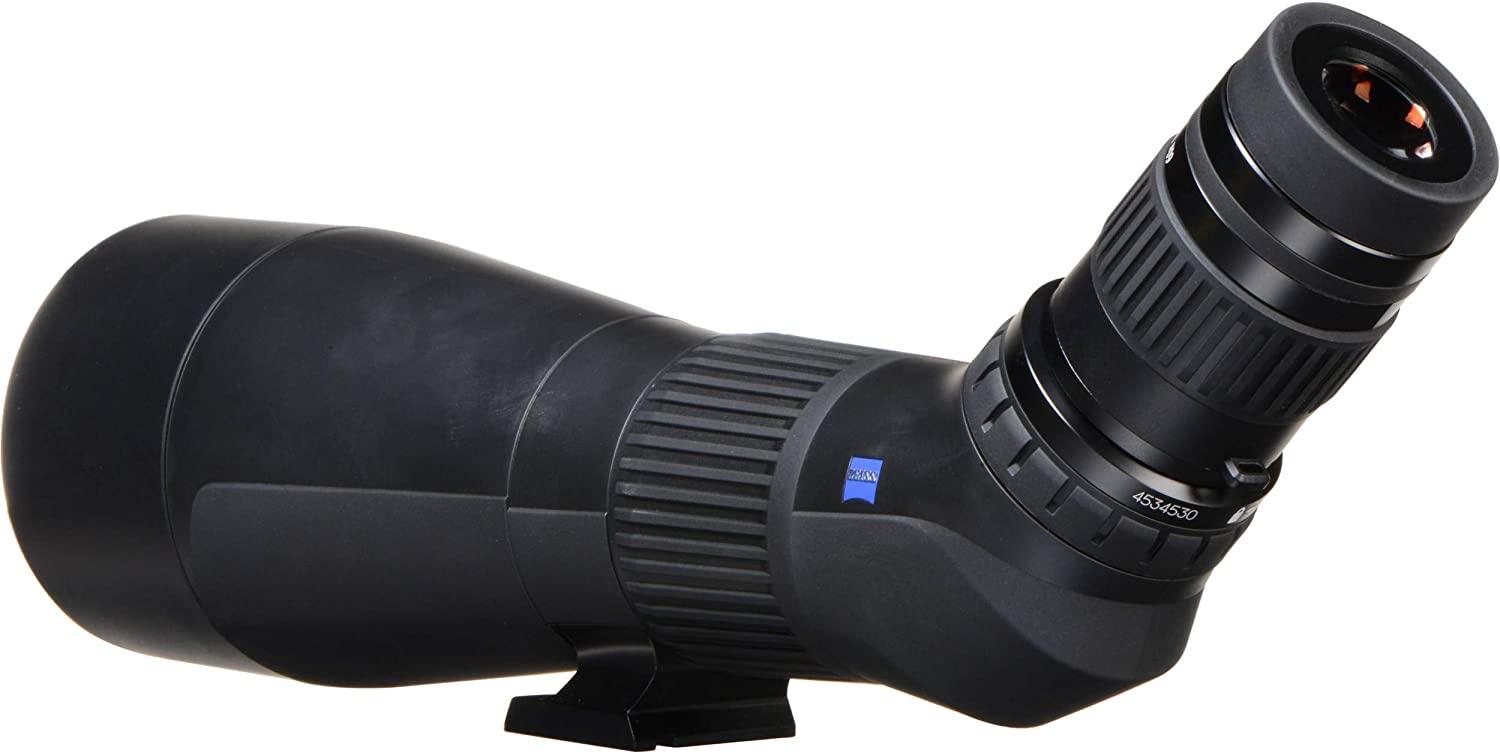 Zeiss has three distinct groups of sighting products. Their entry-level devices are named Terra. The most expensive group of optics are found in the Victory line. The Gavia 85 is part of the middle range of scopes, the Conquest series. A true middle-of-the-road scope in terms of price, the Gavia 85 is accessible for the budget of serious hobbyists and advanced enough to satisfy the intentions of the most dedicated aficionado.

A great deal of thought went into the design and refinement of the Gavia 85. Built with magnesium-alloy housing, the scope is lighter and more compact than most instruments that have an 85-millimeter objective lens. This allows it to be as useful for the casual weekend backpacker as it is for the mountain sportsman. The rubber armor that coats the housing is non-slip and has a nice tactile feel. Two sets of lens caps, so often an afterthought with other manufacturers, come standard with the Gavia 85. The basic caps are so precisely machine that, even after months of daily use, they still fit perfectly. An interior lens block is available that can be used when the heavy-duty scope cover is in place. The objective lens block can also remain in place when the built-in objective lens sunshade is extended. On the bottom of the housing is a tripod platform that easily fits virtually all tripods.

The ocular end of the Gavia 85 sports a remarkable 30-60X eyepiece. Both the magnification and the focus wheels are large and easily turned with just the right amount of tension. The Gavia 85 has a particularly rapid focus adjustment, allowing the target to be acquired quickly.

Concerning the glass lenses themselves, it’s important to note that Zeiss uses two proprietary coatings that create optimum performance. The first is T-Coating (transmission layer coating) which puts a microscopic emulsion on the exterior glass to assure maximum light transmission. The second is the famous LotuTec coating that repels water, smudges, and dust. What happens inside the scope housing is equally important. The Gavia 85 has a roof prism design, which allows the scope to be more compact than other devices in its class. To make sure the image retains true color, heightened contrast, and has no distortion, Zeiss coats the interior prisms with phase correcting P-Coating.

Here at a glance are the specs for the Zeiss Gavia 30-60X 85 spotting scope:

The Gavia 85 comes with a user’s guide, lens cloths, and two sets of lens caps. Also part of the purchase package is a lifetime warranty for the lenses and a five-year warranty on other parts of the scope. Many worthwhile accessories are also available from Carl Zeiss. These include a professional-grade tripod and a long balance slide exclusively for use with the tripod. Also important is the ever-ready carrying case that allows the scope to be used for all purposes without removing the sturdy case. There are also three adapters available so the Gavia 85 can be used for various types of digiscopy.

The Zeiss Conquest Gavia 85 at Work in the Field

Almost always the first comments made by those who have taken the Gavia 85 out and used it for various purposes is that the scope is surprisingly portable, lightweight, and easily set up. As if to prove this point, there is at least one video on the Internet of a user setting up his tripod, mounting the scope, and glassing a trophy buck within three minutes. Those who have any experience at all with the Gavia 85 find it amazingly ergonomic, functional, and pleasant to use.

The second most shared observation is that the Gavia 85 has great potential for use in low light settings. Whether scanning for birds or game animals, the universally shared experience is that these creatures begin to become more active in their habitats in proximity to sunup and sundown, when conventional lenses become much less effective. The Gavia 85 has been repeatedly praised for its ability to provide clear, wide resolution with a minimum of light.

Perhaps third on our list of observations is the tendency of users to compare the Gavia 85 to other spotting scopes. These comparisons run along the lines of the purchase prices of the various scopes, their optic abilities, and ease of use. The Zeiss Gavia 85 has been consistently compared to scopes of greater and lesser magnification and cost and is always rated either as the best available choice or virtually as good as scopes costing much more. One point frequently made by those who have compared the Gavia 85 to other devices is that the spotting scope has become a necessity for certain select pursuits like birding, hunting, natural photography, so forth. Success in any of these endeavors, it has been said, relies as much on “good glass” as any other tool. The recognition of this makes a high-quality spotting scope like the Gavia 85 all the more affordable. A professional guide remarked in this vein that he could not afford to not use a good quality scope.

Many comments were made by users about the digiscopic potential of the Gavia 85. Indeed, virtually everyone who posted a video about the scope on the Internet also included clips shot through the Gavia 85. The ease of using adapters for camera bodies was frequently expressed. The ExoLens smartphone adapter was also frequently attached to ocular, resulting in vivid images and videos that were capable of being streamed.

It should also be noted that several users praised the Gavia 85 for passing the durability test. In the course of regular use, some had placed the scope in extremely hot, direct sunlight and bitterly cold, high wind conditions, remarking that the scope never failed to work preciously as needed. Particularly useful under the most arduous conditions are the smooth helical focus and magnification wheels that are never unpleasant to the touch and can be used easily with the gloved hand. It’s worth noting that the scope is waterproof and, nitrogen filled, will not fog in the lowest temperatures.

For Whom Is the Zeiss Gavia 85 Spotting Scope Truly Designed?

If there is one disagreement about the nature of the Gavia 85, it is around the question for which group of users is the scope truly designed? There are those in the birding community who praise the scope for its ability to achieve very high-quality images of very distant, small, mobile birds. Most mid-range spotting scopes, it was noted, lose this ability. As it was reported, when targets become less visible, the flaws in spotting scopes become more visible. The Gavia 85 rises to the challenge unerringly. Some birding experts flat out say that the Gavia 85 is best used for sighting birds.

Then there are the hunters. Long-distance shooters have posted multiple reports of the glassing ability of the Gavia 85. They note that using the scope to scan for hours in wilderness settings without encountering eye fatigue is a clear sign that the Gavia 85 is the perfect scope for hunting. Images of very small game targets acquired and successfully hunted at the distance of about a mile are regarded among shooters as proof of the intention behind the Gavia 85.

Pros and Cons of the Gavia 85

Of course, no scope is perfect and it’s important to add any potentially negative comments about the Gavia 85 into the mix with all the extremely positive reports shared in this review. It has been noted that the quick adjustment of the focus wheel requires practice. Viewers often shoot right past the sharpest focus because the wheel moves too quickly. It was also noted that, while the scope excels at low light resolution, there is a notable amount of chromatic aberration that occurs: colors tend to become distorted as light lessens.

Whether your interest is birding, nature photography, wilderness hiking, or long-range shooting, the Zeiss Conquest Gavia 30-60X 85 may be the ideal spotting scope for you. Compact, intuitively designed, and simple to use, the Gavia 85 transcends the needs of the novice and the expert user. With a host of available accessories, this scope is right at home in the high desert and the neighborhood greenspace. The Gavia 85 is a newer addition to the outstanding Carl Zeiss line of scopes, one that confirms the reputation and tradition of Zeiss lenses going back more than 150 years.