Leupold’s new laser rangefinder, the RX-1600i TBR, is a moderately priced, high-quality tool that promises rifle and bow hunters a greater distance range than ever and delivers.

Every hunter who uses the bow and arrow or the rifle understands that the distance to any target is measured in yards and meters and also degrees. Looking through a scope that is not accurately sighted in by one inch at 100 yards means it’s off by 10 inches at 1000 yards. The distance magnifies the error. Today, with incredible advances in weaponry, it has become all the more important to ensure accuracy at the greatest distances our projectiles can attain.

Beyond scaled reticle riflescopes and multi-pinned bow scopes, there is a hunter’s tool that can quickly, accurately, consistently deliver the information needed to make that accurate distance shot: the laser rangefinder. Though many of these devices are too costly or too inaccurate, one has proven its worth. This review will describe the Leupold RX-1600i TBR Laser Rangefinder, list its specifications, discuss its TRB ranging, learn how it performs in the field, and how it is reviewed.

With a  footprint scarcely larger than a credit card, the Leupold RX-1600i TBR is unassuming. Less than 4” long and 1.5” high, the rangefinder weighs less than half a pound. You might be tempted to think, based on its size and simple appearance that it’s fragile—but it isn’t. Built by Leupold & Stevens to that company’s famously exacting standards, the RX-1600i TBR is 100% waterproof, weather-resistant, and housed in a rugged rubberized body that is easy to grip.

The user looks through a rubber eyecup, which is the focusing wheel for the 6X magnification, at a high contrast red OLED display. OLED (Organic Light Emitting Diode) is an upgrade to the typical LED display, which often washes out against bright backgrounds. The OLED, with three intensity settings, is visible in all light conditions. The eye-safe, high-performance laser is emitted from the other end of the device and reflected from the target to a fully multi-coated lens system. The single-mode button on the lower part of the housing activates the quick set menu, which offers a dazzling array of features for the viewer.

The RX-1600i TBR, as the name suggests, promises an effective range of 1600 yards for reflective surfaces, a range of 1400 yards on trees, and a range of 1000 yards on large game animals. Unlike other laser rangefinders, this instrument promises acquisition even on darker colored targets. Among the featured operating styles is the scan mode, which allows constant ranging and is especially useful for tracking moving animals. The device offers 17 millimeters of eye relief and a 315’ field of view at 1000 yards. It has an exit pupil of 3.6 millimeters.

Leupold calls the computerized engine that drives the RX-1600i TBR “DNA” for “Digitally eNhanced Accuracy.” The laser, an FDA Class 1 / IEC Class 3R, emits an invisible pulse that reflects to the sensor. These pulses have a minimum range of 5 yards and a maximum range with a deer-size target of 900 yards. Once detected, computerized circuits automatically calculate distance as well as a full array of information that can be personalized for the viewer based upon the bow or rifle and ammunition being used.

The device is powered by a single CR2 camera battery that is rated at 3000 uses. To save power, the Leupold RX-1600i TBR powers down sequentially after inactivity: normal range scanning 7 seconds, menu setup 20 seconds. The user can switch between yards and meters as the default display distance setting. Depending upon how a shooter’s riflescope is calibrated, the user can also choose to use MOA or MRAD gradients to determine distance adjustments. The RX-1600i TBR comes with a two-year limited warranty. 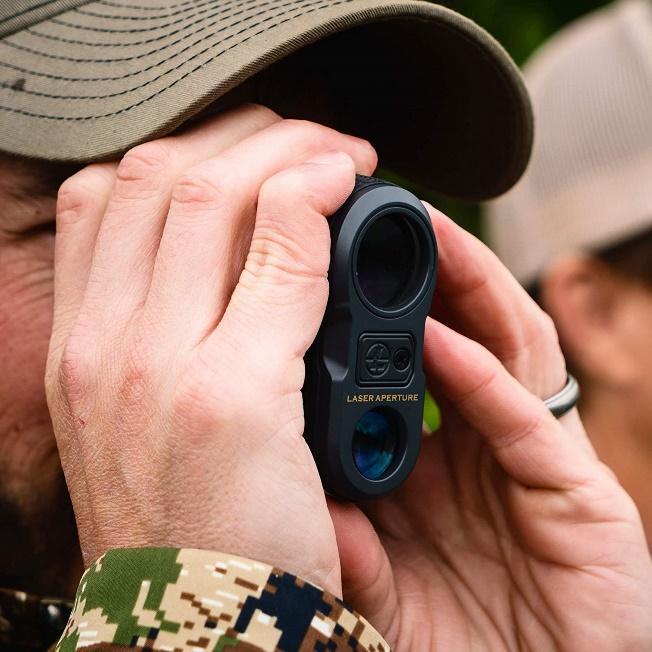 It’s important to note that laser rangefinder users often report differing results when trying to determine distances with these devices. Even with the Leupold RX-1600i TBR or any other top-quality rangefinder there are sometimes seeming inconsistencies in performance. Usually, it is not a deficiency within the device itself causing the problem. The size of the target and its color, weather conditions, air quality, the brightness of the sun—or its absence—can all impact the sensor’s ability to receive an accurate reading of the laser’s pulse. It’s important to remember as well that the power of the laser is regulated by governmental standards and cannot be arbitrarily exceeded by a manufacturer. When we recognize these factors, we may be all the more impressed at the consistent distance readings achieved by the RX-1600i TBR.

The Leupold RX-1600i TBR can accurately, consistently tell the distance to an object as far as 1600 yards (91% of a mile). This startling ability is only the first significant feature it has to offer the archer or shooter. Like other Leupold laser rangefinders, this instrument contains TBR (True Ballistic Range) technology. In a nutshell, TBR means the rangefinder can judge not only the line of sight (LOS) distance to the target, but also determine the slope—up or down—to the target as well and in the same instant tell the viewer what the TBR distance is. The RX-1600i TBR is performing trigonometry in seconds to determine the degree to which gravity will alter the trajectory of a fired bullet or a released arrow.

To access this information—a hunter, for example—the user need only know what caliber weapon and grain of projectile is being fired. Enclosed in the RX-1600i TBR carrying holster is a quick access card that tells into which of 15 possible groups a rifle and ammunition fit. The user can program that group into the rangefinder, which then automatically reads out the proper adjustment of the riflescope for the distance to the target. In addition to the TBR’s ability to guide elevation, windage can be programmed into the device as well up to a 10 mile per hour wind factor.

Within the TBR mode itself, there are five settings from which the viewer may choose: BAS for horizontal line of sight distance, HOLD for the appropriate amount of holdover at the distance, MIL for scopes using milliradian calibration, MOA for minute of angle scopes, and TRIG that simultaneously displays both horizontal and vertical ranges to the target. Additionally, hunters and archers who have sighted in their scopes at particular distances can enter those to achieve perfect calculations.

Leupold also offers several online aids for the purchaser. These can be seen online as .pdfs and printed. They include RX-1600i TBR/W Manual, the TBR/Groups with 200yd Zero, the TBR/W Groups with 300yd Zero, and the Is 2018 RX-1600i TBR-W sell sheet.

Taking the Leupold RX-1600i TBR into the Field

Though available for less than two full years, the Leupold RX-1600i TBR has attracted the attention of many Internet testers and reviewers. Invariably these groups and individuals have rated the RX-1600i TBR as a device of extremely high quality. They have also been consistent in reporting that the device lives up to its promised distancing ability. In some cases, those who tested found the instrument far surpassed its stated abilities in terms of correctly determining lengthy distances and providing BDC (bullet drop compensation) ballistics.

One curiosity noted about these testers is there seems to be some question about whether the Leupold RX-1600i TBR is waterproof or not. Leupold emphatically states that the device is water and weatherproof. If it isn’t waterproof, it’s the first Leupold scope of any kind that isn’t. 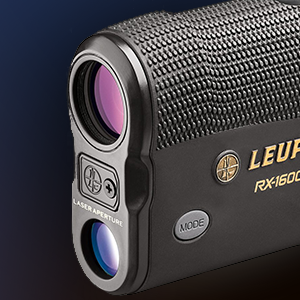 Several investigators compared the Leupold RX-1600i TBR against several other laser rangefinders in the same class, often against much more expensive devices. Repeatedly the RX-1600i TBR proved to be the overall superior instrument. Not only did this rangefinder demonstrate perfect accuracy at every distance tested. For rifle hunters, perhaps the most significant test revealed perfect accuracy on deer-sized game at 800 yards. For archery, the RX-1600i TBR was precisely accurate at 125 yards. The rangefinder was noted for producing data for users quicker than other units. This quality is deemed as being extremely important because rangefinders—even extremely lightweight devices—can only be held in ranging position for brief periods. Also, when one is ranging a moving target, for instance, a deer walking through an opening in a forest, there is typically only a brief window to achieve an accurate reading with the corresponding adjustment information.

Several testers commented on the “user-friendly” nature of the device. The holster with a belt clip and the readily available reference card with the ballistic information was viewed as a real boon and the sort of “small touches” that are characteristic of Leupold’s developers and customer service.

The Leupold RX-1600i TBR received a 4.3 of 5 Stars, with 80% of purchasers giving the rangefinder 5 Stars. Though only available for a brief period, the RX-1600i TBR already ranks #53 overall in Laser Rangefinders.

Purchasers frequently praised the consistent accuracy of the rangefinder. Many tested it repeatedly and were extremely pleased with the precision it attained. The ruggedness of the device was also praised. One user described dropping it 25’ out of a tree stand with no appreciable harm. Another hunter used it in single-digit temperatures and it performed flawlessly. Along with this type of performance, several noted that the instrument remained functional in low light. The clarity of the optics was also a frequent source of praise.

Reviewers also described using the RX-1600i TBR with several primitive weapons including bow and arrow, black powder firearms, and muzzleloaders. The compact lightness of the rangefinder was an important element of the convenience they experienced in using it. Ironically, the unit is often clipped onto larger, bulkier binocular cases.

Many reviewers focused on the financial aspect of the RX-1600i TBR. The most common observation was that the rangefinder is well worth its cost and in fact, outperforms many more expensive laser rangefinders. One reviewer reported personally testing every similar device under $600 and decisively settling upon the Leupold RX-1600i TBR.

Some users moved from one rifle or even one type of firearms to another and were immediately able to use the TBR to plot out distances and adjustments. This is also true for those who switched from firearms to archery.

This is not to say the Leupold RX-1600i TBR is perfect. Some were critical about the rangefinder itself. For example, some noted that the device’s ability to find ranges decreased in low light conditions. The most common criticism of the RX-1600i TBR was not what was wrong with it but rather what users wished would change about it. For instance, one user noted that there is no platform on the base to allow it to be fixed to a tripod. Another wanted TBR values to be set for closer zero sightings of 100 yards or less. Several wanted Leupold to extend the warranty beyond two years.

Discovering a well-functioning, affordable laser range finding device has long been a hit-or-miss proposition until Leupold introduced the highly regarded RX-1600i TBR. Compact, light, rugged, and packed with many useful features, this rangefinder has quickly caught the eye of archers, range shooters, and hunters. Tested repeatedly by various individuals and groups, the RX-1600i TBR consistently reports distances perfectly. Its DNA engine drives the digital TBR ballistic system which gives users data about targets in a variety of useful formats. For the hunter in the field, one of the most beneficial features of the rangefinder is the quickness with which it responds, telling the user the exact distance to the target as well as the effective aiming distance. The Leupold RX-1600i TBR is swiftly becoming an essential tool for the hunter, sport shooter, and archer.