In the expanding market of spotting scopes, there is a need for a budget scope offering quality, clarity, and dependability. Leupold answers need with the SX-1 Ventana 2 15-45x60mm.

It has been estimated that there are around 10,000 different spotting scopes available on the market today. Regardless of what you need a spotting scope for, making your way through the incredibly crowded list of possible choices can be time-consuming, daunting, and frustrating.

If you are searching for a scope manufactured by a company with a reputation for uncompromising quality; if you’re looking for a scope versatile enough to see a small-caliber impact hole at 200 yards, 10 minutes after sundown; if you’re hoping to find a durable scope that’s also affordable, then you need to investigate the Leupold SX-1 Ventana 2 15-45x60mm. This scope comes from a legendary company that provides the largest share of scopes for the US armed forces. In this review, we’ll take a look at the uses and construction of spotting scopes, list the specs for the SX-1 Ventana 2 15-45x60mm and see how it’s rated by those who have used it in the field.

What is a spotting scope and what sets it apart from binoculars, rifle scopes, and telescopes? In a nutshell, a spotting scope takes over for distance viewing at the point where binoculars lose effectiveness. Spotting scopes are also capable of viewing small details at distances far greater than rifle scopes, such as the point of impact where a bullet strikes a target several hundred yards from where it was fired. Though they can be used to look at the moon and stars, spotting scopes specialize in daytime terrestrial viewing. Unlike telescopes, which typically produce an inverted (upside down) image in the eyepiece, a spotting scope produces an erect (right side up) image. 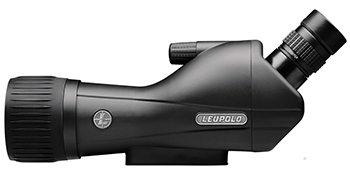 Spotting scopes have a great and growing multitude of uses. The most obvious purposes of spotting scopes are hunting—both for spotting game and sighting in long-range rifles and compound bows, birding, surveillance and security, forestry, and large group observation—such as music festivals and other large venue events. Though they have many different uses, there are several generalities we can make about spotting scopes. They usually have an objective lens, the large, round, glass optic through which light enters the scope of 45 to 60 millimeters and, with those scoops with zoom lenses, a magnification range of 15 to 60X, meaning they can see 60 times more than the unaided human eye.

It’s not just that spotting scopes can see farther than the eye, but they gather more light as well. Each square inch of a scope’s objective lens gathers 9 times more light than the human eye. We want a nice large lens to gather more light. The trade-off is that the larger the lens, the heavy the glass, and the more difficult to maintain the clarity and color of the image produced for the user. 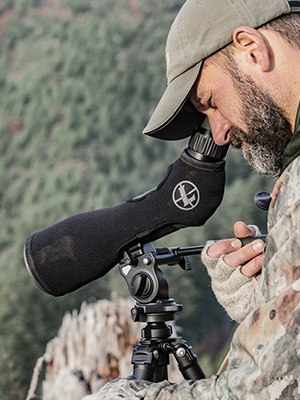 It’s important at this point to recognize that the quality of manufacturing makes a distinct difference. Reputable scope makers can give a consistent resolution of images from the lower powers to the top magnification. It can be misleading to assume that the size of the objective lens and the power of the ocular (eyepiece) lens can assure the viewer will receive the desired image. A proverb repeated again and again about scope optics is verifiably true: “When it comes to glass, you get what you pay for.” That doesn’t mean excellent spotting scopes aren’t available for those of us on a budget. Indeed, several reputable manufacturers have scaled down their finest scopes to share a real quality with those who cannot afford to spend thousands on a scope. An outstanding company that offers uncompromising quality, even in their modestly priced spotting scopes, is Leupold.

Compact and lightweight, the SX-1 Ventana 2 15-45x60mm, is attractive to look at before you look through it. Weighing in at just under 2 pounds, the device is 13.5” long. The spotting scope comes in a vinyl case with egg crate neoprene padding along with a padded soft carrying case, adjustable strap, tabletop tripod, lens cloth, and owner’s manual. The housing is lighter than a great many spotting scopes because it’s made of polycarbonate, armored in rubber. Nitrogen filled, the scope is fog proof. It’s waterproof and exceptionally rugged. A built-in sunshade is available to shield the objective lens in bright light. On the bottom of the housing, users will find a built-in platform for ease in attaching the scope to any tripod.

There are clip-on lens caps for both the ocular and objective lens. Because it’s an angular rather straight housing, which allows the viewer to look down into the eyepiece, the zoom focus adjustment is just in front of the ocular lens. The eyecups themselves are adjustable, intended to allow those who wear glasses—as well as those who don’t—to see unimpeded. The 60-millimeter objective lens is state of the art, as is the fully multi-coated glass. The lenses in the SX-1 Ventana 2 15-45x60mm are protected by Leupold’s proprietary Guard-ION lens coating. Leupold’s glass emulsions allow Twilight Light Management, meaning in this case that users can use the lenses to continue glassing for at least 10 minutes beyond the average spotting scope usage average. At the lowest magnification, 15X, the viewer has a 121’ field of view. At the highest magnification, 45X, the viewer has 63’ field of view. The eye relief—the distance between the user eye and the eyepiece—at 15X is an ample 20 millimeters and at 45X is virtually unchanged at 21.5 millimeters. The exit pupil—the actual diameter of the light the viewer sees through the ocular lens—is 4 millimeters at 15X and 1.3 millimeters at 45X. The SX-1 Ventana 2 15-45x60mm can focus sharply at distances of 4.2 meters. 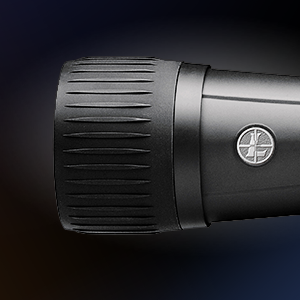 A hallmark of Leupold’s scopes that is equally present in the SX-1 Ventana 2 15-45x60mm is brilliant clarity of resolution from edge to edge of the viewer’s image, even at the highest resolutions. Just as with all Leupold scopes, this one is protected with a highly regarded limited lifetime warranty.

The SX-1 Ventana 2 15-45x60mm has been used for an amazing array of purposes, even watching the scenery across cityscapes. Purchasers have sought the scope for everything for birding to long-range game hunting. Some of the most frequent uses involve sighting in rifles over distances of several hundred yards. Some shooters report being able to see small-caliber bullet impact points on paper targets at 350 yards. A metal target shooter was easily able to spot impact points at 500 yards.

Birders have paid special attention to the rugged construction of the SX-1 Ventana 2 15-45x60mm. The large 60-millimeter objective lens is a boon for birders, who have found that smaller objectives leave them guessing about what creatures they are seeing in low light. Some naturalists note that carrying it in the field all day, even attached to a tripod, is not particularly burdensome because of the scope’s light weight. This is significant in that bird watchers are consistently moving about in the field, adjusting to the terrain, weather, and light conditions.

At the other end of the spectrum are long-range game hunters who enjoy the ability the scope gives them to sit in one place all day and “glass” the terrain. Glassing is the systematic, overlapping sweeping of the spotting scope across the landscape searching for game. Several purchasers reported success in using the SX-1 Ventana 2 15-45x60mm for this in open, western states where the vistas are quite spread out. The Twilight Light Management system proved especially helpful in that many game animals are active at the beginning and end of daylight. One purchaser reported seeing mountain goats on Mt. Rainer that were clearly visible through the SX-1 Ventana 2 15-45x60mm, though mere dots to the unaided eye. Another described spotting distant antelope in Wyoming, and a third wrote of watching wolves in Yellowstone that were more than a mile distant.

There are also reports, as with other fine spotty scopes, of purchasers and family members utilizing the scope for pleasure. As one user reported, the presence of the scope created a certain amount of discord as some family members wanted to take it on nature walks, while others wanted to use it to sight in rifles—the originally intended purpose.

One of the constant praises for the scope regarded the consistent clarity of the image at every magnification. The scope seems to do a really good job of gathering light, even at the extremes of daylight. The remark was made that, if one is picky about wanting good light and sharp resolution, this is the right scope for you.

The ruggedness of the device was frequently a subject of positive comments, as well as the scope’s compact size, low weight, and portability. The scope is regarded as being quite intuitive, with the placement of all features exactly where they need to be and all, including the sunshade, easy to use, and ergonomic to the touch. The comfortable length of eye relief was also a source of praise. In general, the accessories were considered quite good, the one exception being the tripod, which was often considered not sturdy enough even for a lighter scope like the SX-1 Ventana 2 15-45x60mm.

Several reviewers explained that they bought this scope for a certain specific purpose—to spot target impacts, or to give as a gift to someone who needed a spotting scope. In each case, the SX-1 Ventana 2 15-45x60mm fulfilled the intended purpose just as desired.

Price was a major consideration for many purchasers. A number expressed that the SX-1 Ventana 2 15-45x60mm found a middle ground between cheap, shoddy scopes and the high-quality scopes that are also too expensive for those of moderate budgets. One reviewer commented expressed that the SX-1 Ventana 2 15-45x60mm was the “goldilocks” scope, not too expensive but more than acceptably high in quality. The scope was often regarded as well worth the expense.

Several individuals found the need to use the Leupold warranty and each reported the customer service was prompt and their problems were successfully resolved. It’s also worth noting that the many Leupold fans among purchasers not only identified themselves but proclaimed their faith in this manufacturer to be justified.

While there is no single device that can meet the many needs of all spotting scope users, the SX-1 Ventana 2 15-45x60mm is extremely versatile across a range of purposes. From birding to shooting range spotting, the scope accomplished everything asked of it for virtually all purchasers. Of particular note was the brilliant, true-color resolution provided by the lenses across all magnification powers. More attention was paid to the ancillary benefits of the SX-1 Ventana 2 15-45x60mm, including the lightweight housing and especially the ease of transporting the scope from one location to another.

Many previous Leupold users found their faith in the brand confirmed by the performance of the SX-1 Ventana 2 15-45x60mm. A moderately-priced product, this scope was recommended by purchasers for the clarity of its image, the ruggedness of its construction, the ease of its portability, and its overall value. In this scope, Leupold seems to have found a way to share its legendary quality with those who seek a more modestly priced spotting scope.