Mil-Dot Hits the Target Every Time

Meta: When it comes to understanding rifle scopes, so many people are confused about the “Mil-Dot.” In simple terms, this article spells out why the mil-dot is essential for sighting accuracy.

Whether at the target range or in the deer stand, accuracy is the shooter’s most important concern. Just as technology as brought precision to so many other aspects of daily life, so firearms and sighting rifles, in particular, has been elevated to the highest levels of accuracy and safety in part through the use of mil-dot reticles in scopes.

Make sure you are not to be deterred by an unfamiliar term that describes an idea that has been around as long as there have been targets and hunters. This is a simple guide to explain what the mil-dot is and to give some examples of how it serves marksmen in today’s rifle sighting products.

A New Name for an Old Marksman’s Idea

It seems all new sighting scopes these days, from the high-end computerized models to the best budget-conscious ones, use mil-dot reticles for sighting targets. What are mil-dots anyway and why are they important to sighting and shooting?

The word mil-dot comes from the mathematical term “milliradian,” which is just an angle roughly equal to 1000th the circumference of a circle. To understand what it means, think about pointing your rifle straight out in front of you. If you fire a round, gravity pulls the bullet down toward the earth as it goes forward. The arc or angle at which the bullet falls as it goes forward can be measured in milliradians—mil-dots. In times past the shooter had to guess how far the bullet would drop before it got to the target. Thanks to the mil-dot, the marksman no longer has to guess either how far it is to the target or how far a round will drop on the way.

What we’ve talked about so far is elevation: the bullet falling straight down. Of course, all target shooters know that wind also can blow a round off its intended trajectory. Hunters know that their target may be moving. The good news is that mil-dot scopes can also compensate for windage and moving targets as well as elevation.

To use the available mil-dot technology, you don’t need to be a physicist, just know a couple of basics facts. First, as you look through a mil-dot sighting scope, you’ll see a series of dots along the vertical and horizontal crosshairs, usually five up and down and five to each side. Each of these is a mil-dot or a “click.”  These mil-dots allow the shooter to accurately calculate the distance to the target and thus allow the shooter to know how far a round will drop over that distance. If you know the distance to the target and how far the bullet will drop on the way, then the dot-mil reticle scope will allow you to adjust the sight precisely.

As marvelous as the principle of the mil-dot is, it’s even more exciting when it’s put into action. We can see these in the products below that each use mil-dot technology in innovative ways.

You Can Do It Yourself with the Mildot Master 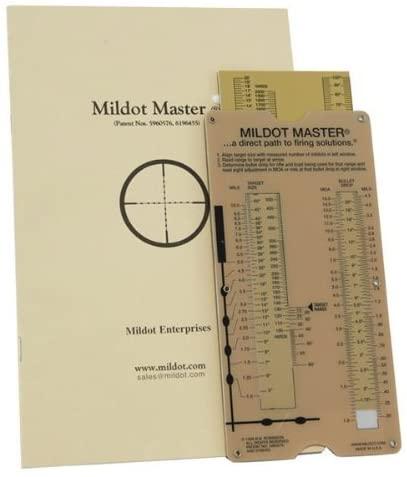 Remember slide rules? Think they’re obsolete, a sign of bygone times? Think again. Nothing is more accurate and up-to-date than the Mildot Master from Mildot Enterprises. Whether you’re sitting in a deer stand, watching a buck stroll downhill across a pasture or standing on a range while looking at a distant target, the key to figuring distance and elevation with precision is found in this laminated sliding scale card that’s smaller than 9” x 6”.

On the back side of the Mildot Master is another aid, a slope calculator: by holding the card at the same angle to the target, rising or falling, the card reveals the degree of angle to the target. This, combined with the distance, allows great precision in knowing exactly how to adjust a scope to a specific target. The sliding card is reversible, with yards-feet-inches on one side and meters-centimeters on the other. To best use the degree-of-slope feature, it’s a good idea to a small plumb bob or fishing weight to the card in a riveted slot specifically designed for it.

The Mildot Master is not expensive and, of course, requires no batteries or special handling. It has the distinction of being extremely well-rated, with 87% of its reviewers giving it 5 stars.

Among the observations of reviewers, it’s noted that comparable digital devices can cost several hundred dollars and are not necessarily more precise. The Mildot Master, it was noted, comes with easily comprehensible instructions. It was also observed that the card not only doesn’t need batteries, but it eliminates the need for a spotter to help judge distances. The Mildot Master is especially useful for extreme long-range shooting.

The NC Star Sighting System is the next generation of rifle sights. Flexibility for long-range, short-range, or quick shooting is the key element of this device. A mid-priced scope, it builds upon its Mark III Tactical 3-9X long-range scope system by adding the Micro Red Dot Reflex Optic, which allows for quick, close-up laser targeting. Additionally, the NC Star Gen-2 is built on an elevated frame to accommodate BUIS (back-up iron sights), the original dovetail sights that come with every shooter’s rifle. The design has a slant sunscreen shielded by a stealth hood over the quick focus eyepiece. 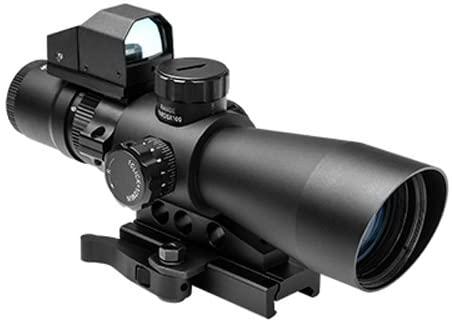 How does the NC Star Gen-2 utilize mil-dot technology? In addition to mil-dot crosshairs, the optic has built-in blue and green illumination controlled by a rheostat. This allows the visibility of the reticle to be adjusted gradually for the conditions the shooter is experiencing, making the mil-dot reticle much easier to use. This is particularly important for dawn and dusk hunting. Another major feature of this scope is the Bullet Drop Compensator, which automatically plots the trajectory of a round between 100 and 500 yards.

The NC Star has focused a great deal on enhancements and improvements to the design and function of the scope. Among the changes are lowering the BDC (bullet drop compensation) turret height that is used to adjust mil-dot clicks, which allowed the Red Dot Reflex Optic to be lowered also; improvements to the quick release lever for the locking mount; and a redesigned hood for the eyepiece.

Ranked #22 in rifle scopes, 54% of the scope’s reviewers give it 5 stars. Among reviewer comments, the most frequent topic was the high value of the scope considering its moderate price. Several users remarked that the scope was well-suited to the AR-15 style rifle. Several reviewers appreciated having both the potential for short-range and long-range targeting in the same scope. Several users commented on the ruggedness of the scope as well as the relative ease in mounting it to their rifles.

The UTG Compact Scope is another mid-priced scope that has used mil-dot technology to create some unique features in the device. Beyond the two-color illumination so often used by mil-dot scopes, the UTG features 36 possible reticle colors from which the user can draw the best choice for the particular shooting circumstances. It boasts a best-in-class lens and a memory that allows the shooter to return immediately to the color choice and mil-dot settings previously in use.

Leapers/UTG has been a leading developer of mil-dot technology in its scopes going back to its initial efforts in 2003. With this scope, as with most of UTG’s other scopes, they use the Tactical Range Estimating reticle. This doubles the potential number of mil-dot clicks available for both elevation and windage. UTG boasts, “With some patient learning and practice using our TRE, shooters can enhance accuracy and performance in ways not imagined before.”

Much of the design of the UTG Compact Scope centers on ruggedness and dependable precision. The scope is built on a True Strength Platform designed to hold focus and allow visibility and maintain sighting even through heavy recoil. Likewise, the targeting turrets are fashioned to be extremely precise and to lock in place once set. Speaking of the turrets, they are SWAT—not “special weapons and tactics”—but “side wheel adjustable turrets,” designed to achieve a parallax-free view through the emerald lens at distances from 10 yards to infinity.

The UTG Compact Scope is highly rated and reviewed. Ranking #12 in rifle scopes, it has received more than 1300 reviews with a 70% 5 Star rating. Among the most frequent comments, reviewers said the UTG compared favorably to higher-priced scopes. Many found it rugged and easy to use “right out of the box.” The quality and clarity of the lens were frequently mentioned, as was the accuracy of the scope even at longer distances.

For a scope budgeted in the economy price range, the Pinty Tactical Rifle Scope manages to offer some high tech features, versatility, and innovation. While, like other mil-dot scopes, the Pinty offers color illumination of a highly adjustable field of view, 2.5-10X with a 40-millimeter objective, it also comes with a laser sight that has a range of 100 yards.

It’s illuminated mil-dot reticle features red and green color selections with five brightness settings for bright daylight to dawn or dusk shooting. The dioptric eyepiece gives consistent vision through the optic across the entire range of vision regardless of the magnification being used. The Pinty scope uses a green, multi-coated objective lens to enhance clarity. 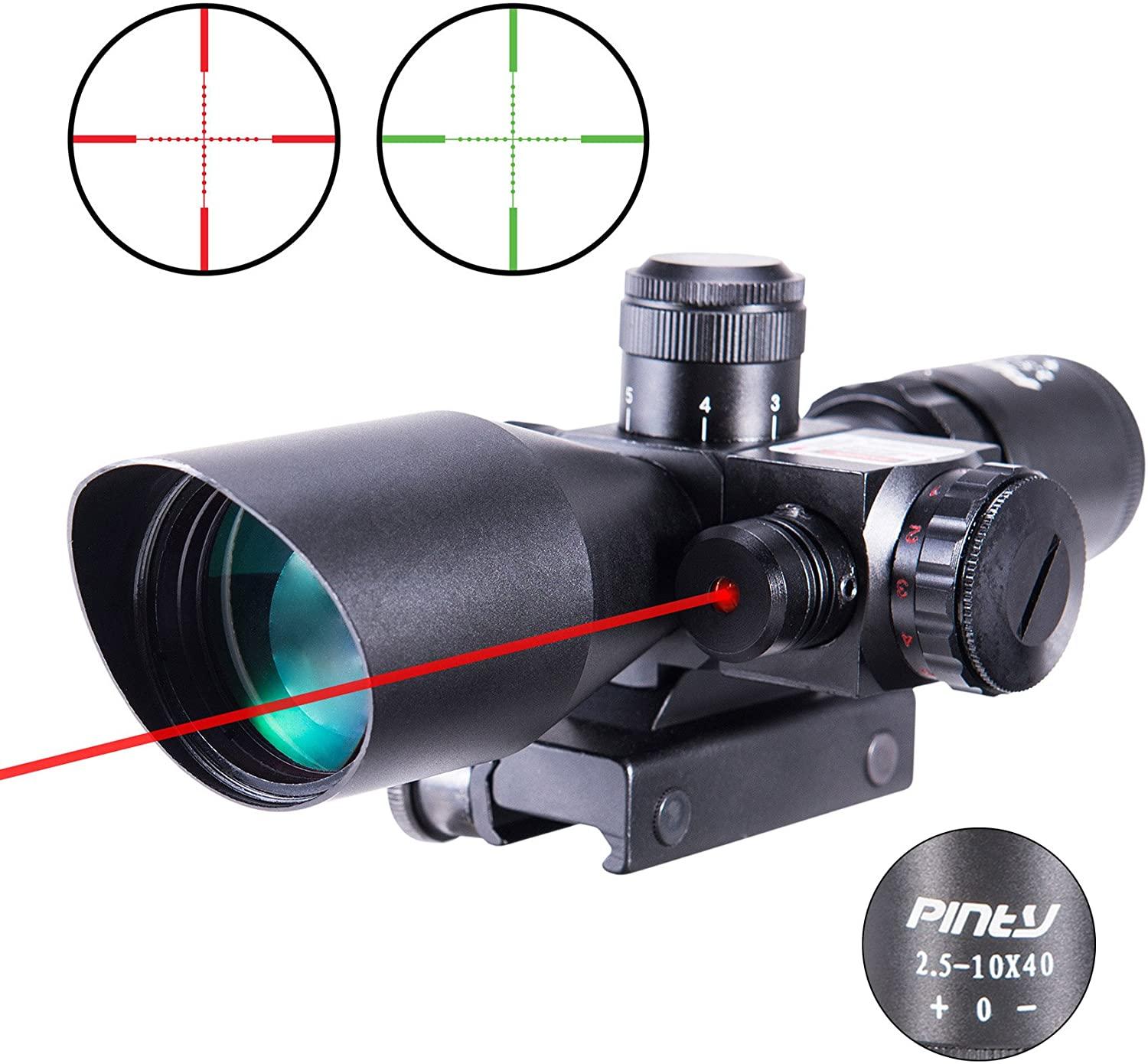 Economical as it is, the Pinty scope features several user-friendly features, from the hooded eyepiece to its quick set up for rifles with either Weaver or Picatinny railing. The scope is a boon to hunters since its laser sight is intended for quick acquisition of targets in near to mid ranges.

The Pinty scope is quite popular, with a #2 rating among rifle scopes. It’s received 5 Stars for 66% of its more than 1000 reviews. Several reviews mention that the scope holds zero well, even with higher caliber rifles and high usage. The size and flexibility of the scope have prompted some individuals to test it on a variety of weapons. The most frequent review comment is that the scope is a great value for the money. Users have compared it favorably to Leupold, Sig Sauer, and Redfield, indicating the Pinty met and exceeded their expectations.

What is the mil-dot and why is it important to the shooter? Mil-dot is the angle of a circle and the shooter can use it to measure the distance to a target, to determine how far a bullet will drop on the way to the target, how much the wind will affect the round, and where to aim at a moving target. While hunters and marksmen have always known that factors like distance and wind would challenge their ability to aim accurately at their targets, today’s shooter has a variety of tools that enable real precise targeting, even at long ranges.

From the slide rule style calculator that unerringly reveals the distance of a target and how sloping terrain impacts the shot, to the brilliantly lit reticles of advanced sighting scopes, the humble mil-dot is truly a mighty tool for any shooter. Regardless of the rifle you choose or the type of shooting you prefer, there is a mil-dot scope that is perfect for you.