Most rifle scope users know exactly what they want to accomplish and thus seek a hunting scope that at least doesn’t get in the way. What is rare and remarkable about the Burris Scout 2 Rifle Scope is that it seems more eager to get out into the field than the hunter does.

The Burris Scout 2 appears simple, sleek, and rugged right out of the box, and that’s exactly what it is. At less than 10″ long and weighing 13 ounces, the non-reflective matte black finish has a no-frills, all-business look. With a 32 millimeter objective lens, a 38-millimeter ocular lens diameter and a 2 X 7 magnification range, the Scout 2 uses a Ballistic Plex reticle. With an eye relief of 9-12 inches and an exit pupil of 16 to 4.6 millimeters, the Scout 2 has a field of vision from 23′ to 8′ at 100 yards depending on the magnification. The parallax is factory set at 100 yards.

Using MOA for adjustments, the Scout 2 has a ¼” click value at 100 yards. Made of steel on steel, the adjustment turrets give a nice, audible click and hold position. Once dialed in, the scope maintains accuracy with its Posi-Lock system: a coil spring retractable post. Elevation and windage adjustments, each with a maximum of 66″, are quick. The scope is shockproof, waterproof, and will not fog, owing to being purged at least 24 times during production with lab-grade dry nitrogen. This also contributes to the Scout 2 being recoil proof even with continual use.

As with other true Scout scopes, the Burris is designed to be used with both eyes open. The scope sits forward, usually completely off the receiver, allowing the rifle to be balanced more easily when carried and allowing the user to close a hand completely around the receiver. Burris optics have a well-earned reputation for being clear and, with the Scout 2, the scope is designed to be used for quick sighting, so the hunter can remain completely aware of the surrounding environment.

Because many rifle scopes have a much higher magnification than the 2 X 7 offered by the Scout 2, it’s important to remember that this scope has an IER (immediate eye relief) design. Scout scopes, typically further from the shooter’s eye, use lower magnification—and are intended to be used with both eyes open—to enhance the field of vision.

The Scout 2 is intended to be versatile. It can take a real pounding from the recoil of larger caliber rifles but is also air rifle rated. So the big game hunter and the backyard plinker will both be well-served by the scope. While conventional wisdom holds that scout scopes are better suited to lighter, smaller caliber weapons, the Scout 2 is often mounted to older military-grade weapons and larger caliber bolt action models. With this mid-price range scope, the manufacturer makes the ultimate expression of confidence in its Scout 2 by supporting it with the Burris Forever Warranty.

What Sets the Scout Scope Apart?

Forty years ago, the legendary Marine Col. Jeff Cooper penned a now-famous article in which he outlined the criteria for a general-purpose rifle that he would call “the scout rifle.” He envisioned that such a weapon would be fairly lightweight—ideally about .308 caliber and weighing no more than 30 pounds—and no longer than a meter (about 40″). Such a piece should be slung about the body so as not to impede the user and should be subject to quick reloading. Its function was to quickly be aimed and fired and capable of bringing down a target weighing 200 kilos (about 440 pounds) from a distance that would allow sufficient accuracy to ensure striking vital organs. The article gained fame and became a touchstone and then a guide for developing rifles and their capabilities. Within 20 years, the first rifles specifically branded “scout rifles” were being produced by Steyr-Mannlicher, and today a multitude of major rifle manufacturers build some form of a scout rifle.

Of course, once you have a specific design and intention for a rifle, it’s necessary to have a suitable scope to go with it. The scout rifle scope was developed as a sighting optical for shooters who needed to be able to respond very quickly in the changing environments of field situations. The scout rifle hunter may be intent on bringing down a deer at 500 yards, only to suddenly encounter a bear at 75 yards, a situation that is often referred to as “run and gun.” The need for swift, accurate versatility is the hallmark of the scout rifle and scope. Average magnification on a scout scope is often 1.5 X 5, though some offer up to 8X.

Because it’s intentionally meant for use in the field, the scout scope must be rugged and consistent. A scout scope should have a thin reticle with crisp, clear optics for precision and certainty when aiming with no fancy illumination or calibrations to slow down the shooter’s response time. In terms of accuracy, a scout scope should enable the shooter to place a grouping of three rounds within a 4-inch pattern at 200 yards (2 MOA). When choosing a scout rifle scope, the hunter will want the instrument to have been built with real quality and tested rigorously, because the field is no place to discover a scope’s built-in flaws. Of course, the hunter isn’t always in the field. For that reason, it’s important to know that the manufacturer of your equipment will be there to help correct the situation if a problem develops.

How Does the Burris Scout 2 Measure Up to the Ideal Scout Scope? 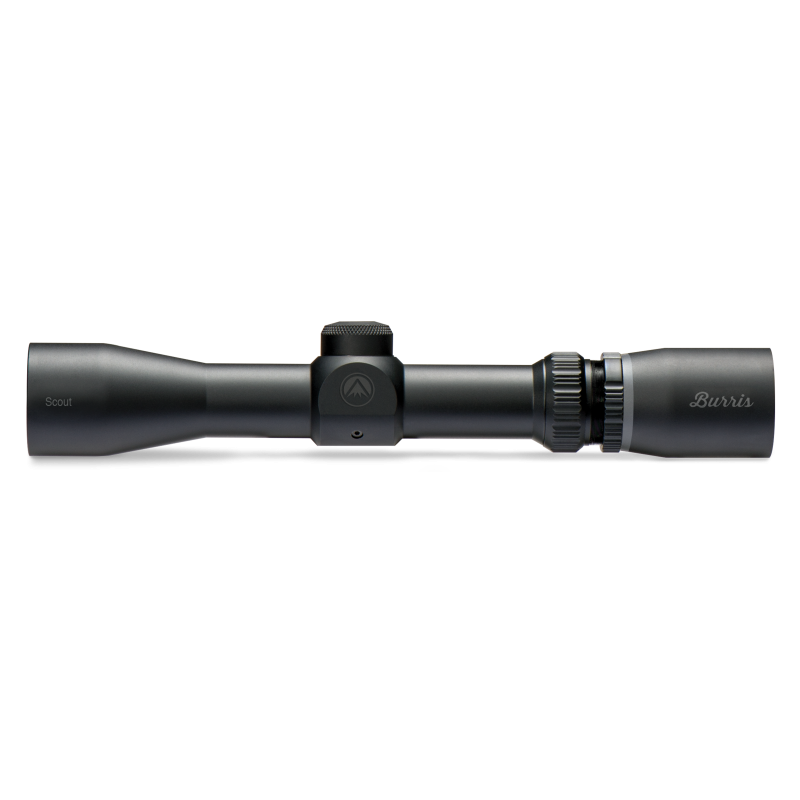 Both the objective and ocular lenses of the Scout 2 are larger and better refined than typical scout scope lens. Burris uses a proprietary lens coating with the slightest green tint to reduce haze and reflection so that nothing interferes with the sightline in the spur of the moment. Of particular interest for those who know they may be sighting and firing in a split second without being able to adjust for greater distances is the BDC (bullet drop compensators) reticle with ballistic drop marks built into the scope, which is a key feature of the Scout 2.

The Scout 2 scope has been extensively recoil-tested with “recoil pulse acceleration and duration” designed to match the stresses the scope will experience during continual firing. Testing reveals that temperatures and continued use do not adversely impact the scope’s ability to consistently hold zero. Burris scopes in general and the Scout 2, in particular, have the dual reputation of outstanding lens clarity and a rugged quality build.

Perhaps it’s because scouting rifles are more likely to endure the rigors of the field, but one repeated report is that shooters have abandoned other scouting scopes for a multitude of reasons and then successfully adopted the Burris Scout 2. The Scout 2 has reportedly been used to successfully replace other scopes that had trouble with mounting height or forward position, that could not handle the recoil—especially over periods of continual firing, that did not have sufficient optical quality or that didn’t have an accurate BDC reticle. Standard rifle scopes often interfere with scout rifle bolts or ejection ports. Also, when a standard rifle scope is attached forward on a scout scope—as is intended with scout rifles—the scope’s field of vision is severely restricted and proper eye relief distance cannot be maintained. With the Scout 2, these issues are completely alleviated.

What Do the Reviewers Say?

Surprisingly, for a scope this highly regarded by the experts, the Burris Scout 2 Rifle Scope is not particularly well known. Still, it is ranked #162 in Rifle Scopes and has 4.5 out of 5 stars, with a whopping 73% in 5 Star ratings.

It’s noteworthy that the Burris Scout 2 was quite frequently compared favorably to other scopes in the scout scope class, including others of high repute, like Leupold, Vortex, and Nikon.

Another constant refrain among reviewers was the outstanding quality Burris builds into the Scout 2 scope. Many raters pointed out that the price of the instrument was more than deserved because of the workmanship, testing, and performance they experienced when using the Scout 2.

Reviewers mentioned a wide variety of rifles upon which they had successfully mounted the Scout 2, including many military pieces: the M1 and M1A. It was apparently often the case that shooters had a favorite rifle—or one whose capabilities they really wanted to check out—and the Scout 2 scope enabled them to bring out the best in these weapons.

If there is a universal compliment the Scout 2 received, it may be that it provides outstanding eye relief. Other scopes are often criticized for inadequate eye relief, especially when the recoil of the rifle brings the scope back against the shooter’s eye. Many noted that, even at the highest resolution, the Scout 2 allows a gracious amount of eye relief and an ample field of vision. It was also noted that the scope was clearly designed for the practice of having both eyes open, which is particular to scouting rifles. Long eye relief also translates to quick target acquisition.

One of the most frequent comments about the Burris Scout 2 is that it is simply a great scope. More than once it was said that the Scout 2 was excellent from the first use and the excellence did not diminish over lengthy, robust use. Several reviewers reported having multiple Scout 2s, along with other Burris scopes, and that the quality was not merely present in the one product but across the board with Burris goods.

It should probably be noted as well that the overall tone of comments about the Scout 2 was one of real enthusiasm. It was almost as if talking about the scope and their experiences with it reminded reviewers of what they most love about shooting sports.

About the only negative comment made more than once was that some reviewers wished the scope came with a built-in lens cap.

If Col. Jeff Cooper had a scope in mind when he described his ideal weapon—the scout rifle—chances are it would have been very much like the Burris Scout 2 Rifle Scope. Rugged, good looking and full of quality in every respect, the Scout 2 is adaptable and ready to head out to the field. Built to withstand shock, weather, and water, the Scout 2 holds zero, adjusts smoothly and rapidly, and—when time doesn’t permit—has a BDA reticle for the quick shot. Easily attached and sighted to a variety of rifles, the Scout 2 is amazingly flexible and dependable. Those who have used it swear by it, rate it very highly and enthusiastically encourage others to give it a try.