Swarovski Optics combines superiority with innovation in the Swarovski 20-60X 80 STR spotting scope. With an illuminated reticle in a superb scope, it’s ideal for sighting and hunting.

It has been said of individuals and products that have repeatedly demonstrated superiority, “They are not alone in their class, but it doesn’t take long to call the roll.” The exception to this may be the Swarovski 20-60X STR 80 MOA spotting scope. This device is simply alone in its class. There is no other comparable scope with which it can be compared.

The Swarovski 80 STR is actually two outstanding instruments in one product. First, it is a spotting scope that carries on Swarovski’s reputation for producing scopes of the highest quality. Second, it is the fulfillment of the long-distance hunter’s dream because it contains an illuminated reticle that allows a spotter to sight in a rifle with astonishing precision, or determine the range to a game animal with amazing exactness. This review will discuss the Swarovski legacy, examine what sets the Swarovski 80 STR apart, detail its specs, and see how it performs in the field.

Swarovski Optics did not achieve its dominance in the field of lenses and scopes overnight. Indeed, the path to its current superiority began more than 125 years ago when an Austrian optician, Daniel Swarovski, invented an electrically-powered machine that made it possible to cut crystal glass. Daniel actually represented the second generation in his family to work with glass. His father owned a small glass factory. It was the third generation of the family that added a radically new direction to the Swarovski heritage. Wilhelm Swarovski, Daniel’s son and a student of astronomy, created an innovative pair of binoculars in 1935. This led to the eventual creation of Swarovski Optics and the superior line of binoculars, rifle scopes, and spotting scopes for which the company is known today.

While Swarovski Optics has been revolutionizing the magnifying scope industry, the original focus of the business has continued. In the same way, every hunter, spotter, and birder is aware of the preeminence of Swarovski lens glass, just so Swarovski Crystal is the default choice of hobbyists, jewelry makers, and seamstresses around the world. The same company that makes incredibly rugged, precise spotting scopes like the Swarovski 80 STR also makes magnificent crystal chandeliers, rhinestones, and impeccable glass sculptures.

The Innovative Qualities of the Swarovski 80 STR 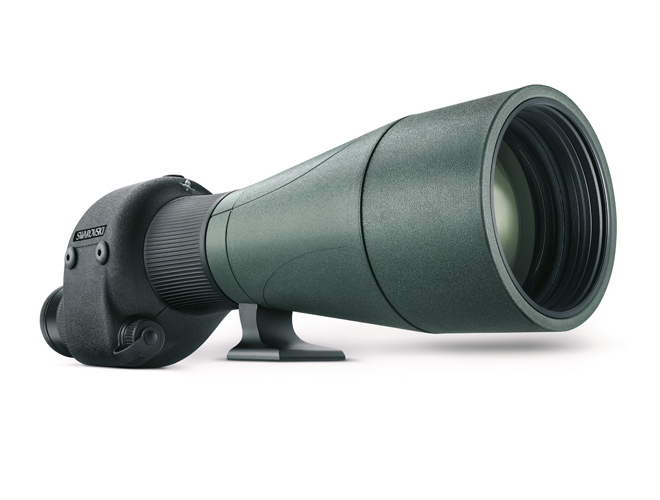 Swarovski produces several other high-quality spotting scopes that have been adopted by various groups of users like birders, environmentalists, nature lovers, and hunters. There is no doubt, however, as to what the company’s primary intent was in creating the 80 STR. Within the image of the scope, users will see a reticle that is virtually identical to the crosshairs of a rifle scope. We recognize from this that the two essential purposes of the 80 STR are spotting and sighting in rifles for long-distance shooting.

The pedigree of this instrument is ideal for any spotting scope. As with all Swarovski scopes, the clarity of image and side-to-side flat resolution is of the highest quality. The lenses are coated with several proprietary compounds that bond with the exterior glass to prevent smudges, abrasions, and chromatic aberration, so the color and contrast of the image are vivid and consistent. The high-definition fluoride glass is used in the Pirro prism construction of the housing, allowing for longer light ray extension and thus truer color and depth.

The Swarovski 80 STR is made of a lightweight, durable magnesium alloy. It’s sealed with O-rings and filled with inert nitrogen gas. Swarovski Optics has been a pioneer in waterproofing their devices and, because of its construction, the Swarovski 80 STR is waterproof to a depth of 13’ and fog proof. On the bottom of the housing, there is a tripod platform that can be used not only with Swarovski’s own but with virtually any quality tripod. Once on the tripod, the housing can be rotated to suit the viewer, so a shooter can look straight ahead through a rifle scope to fire, then immediately turn to the side and view the impact point through the spotting scope.

Above the eyepiece is a reticle adjustment with 15 settings, including five low light points, that let the user determine the ideal brightness of the reticle. The eyepiece itself, which controls the scope’s magnification, is adjustable as well to suit the user, whether with or without eyeglasses. On the body of the housing is the recessed diopter adjustment, which is turned with a key to allow the individual user to find the perfect focus. The large easily turned focus wheel is on the housing of the scope. At the objective end is an adjustable sunshade.

Here are the technical specifications of the Swarovski 10-60X 80 STR spotting scope:

In addition to the body, the 20-60X eyepiece, and the lens caps, the 80 STR also comes with the highly regarded Swarovski limited lifetime warranty. There are also several accessories that Swarovski Optics recommends for use with the scope. These include the wide-angle 25-50X lens, winged eyecups that are available for either eyepiece, and a cleaning kit. Swarovski also has a mounting bracket that allows SLR cameras to be attached to the scope for digiscopy. There is also a smartphone mounting bracket. The reticle is powered by a single CR123 battery rated for 1300 hours of use.

The Remarkable MOA Reticle of the Swarovski 80 STR

Built into the 80 STR is a single plane reticle that appears to the viewer as the crosshairs of a riflescope. The difference is this reticle is illuminated and, as if powered by a rheostat, the brightness of the reticle itself can be adjusted to compensate for the brightness—or darkness—of the ambient light as well as the personal preferences of the user. The significance of a single plane reticle is that, regardless of the magnification selected by the viewer, the size of the reticle remains unchanged.

Another important feature of the reticle is that it can be turned off completely by the user. An illuminated reticle can become a distraction for a viewer when not needed but is instantly available when it is required. In designing the device, Swarovski understood that hunters would need to able to “glass” without interference from the reticle. Glassing is the slow, methodical sweeping of the spotting scope’s image from one side of a vista to the other in search of targets. Traditionally, once a target has been spotted, the hunter then must sight the target with a range-finding rifle scope and adjust to the assumed distance to the target. The 80 STR is capable of finding the target, then with the illuminated reticle activated, revealing the exact distance to the hunter, so adjustments to the riflescope can be made even before acquiring the target.

It should be noted that the default reticle included in the Swarovski 10-60X 80 STR is calibrated for MOA (minutes of angle) as opposed to MRad (milliradians), but Swarovski also makes an MRad reticle available for the scope as well. By way of explanation, both MOA and MRad calibrations are based upon the circumference of a circle. MOA is based upon the notion that there are 360 degrees in a circle and within each of those degrees there are 60 minutes. As a degree goes forth from the original circle, it expands in a mathematically predictable manner: the distance between two minutes at 100 yards is 1 inch; at 1000 yards, therefore, it is 10 inches. Knowing the distance to the target and knowing the rate at which the bullet will be pulled down by gravity, the hunter can judge the impact point precisely.

How Does the Swarovski 80 STR Perform in the Field? 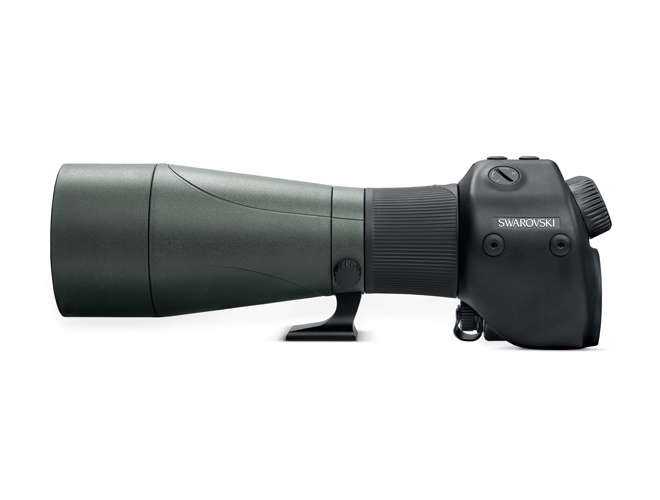 As it often the case, high-end spotting scopes are not widely reviewed. They are, fortunately, well-tested by optic experts and used in various types of competitions. Thanks to this, we can glean several important insights into the 80 STR.

We should note immediately that the 80 STR does exactly what Swarovski Optics intended for it to do: it is an extremely accurate tool for helping to sight in long-range rifle scopes. Like other Swarovski scopes, the 80 STR offers a brilliant image that remains flat—and therefore easy on the eyes—from one edge of the image to another. The remarkable contrast in the image effectively removes the natural camouflage of the game animals being viewed so that they seem to “pop” out of the background and into view. The resolution of the scope is such that, if a spotter is watching while the rifle is fired at the target, the bullet can often be seen before making an impact.

There also seems to be an irresistible desire on the part of users to use the 80 STR for digiscopy. Video and photos, taken either by an SLR camera or a smartphone, display the astonishing magnification range and the clarity of detail of which the 80 STR is capable.

The customary Swarovski ruggedness and attention to detail are also apparent in the performance of the scope. The instrument functions smoothly with all features working exactly as intended. The objective lens cap does not detach but rather slides to the side of the housing so that it will not bang against the scope even in the strongest wind.

With the 10-60X 80 STR, Swarovski Optics has built upon its long tradition of innovation and superb quality. As with other Swarovski scopes, the 80 STR offers the finest image quality in its class. Unique to the 80 STR is an illuminated MOA reticle that transforms the instrument from being simply one of the best spotting scopes in the world into an extremely precise sighting instrument for the long-range shooter.

Longer and heavier than other Swarovski spotting scopes, the 80 STR is clearly not intended for the weekend hiker’s backpack. For the serious long-range shooter, however, the 80 STR is the ultimate tool to fine-tune the shooting performance of any rifle without guesswork or frustration. Spotters and hunters, especially those involved in competitive shooting, who are seeking an edge to elevate their abilities will certainly find that in the Swarovski 80 STR. This spotting scope is a lifetime investment in excellence.