The well-known, century-old Eastern European optics giant Meopta has created a stir by making its best precision spotting scope, the Meostar S2, available at last on the American market.

A tale that began more than a century ago in Eastern Europe is telling its latest, very exciting chapter here in the United States. Perhaps you’ve heard the proverb, “things of quality have no fear of time.” That saying is certainly born out in the history of the Meopta company. Initially founded in 1907 in what was then Slovakia, the founders intended to make military optics. Fast forward 113 years and it’s as clear as an 82-millimeter hi-def lens that the original dream of the founders is still being fulfilled, along with many other grand accomplishments.

This article will review one particularly auspicious creation of the Meopta company, its state of the art spotting scope, the Meostar S2. While many in Europe, and some Americans who are birding hobbyists, are familiar with Meopta and its products, few in the United States—especially in the western part of the nation, where it would be incredibly useful—have heard of this top-flight device. It’s clear that, given just a little time for the word to spread, this scope will soon be recognized and revered.

Before discussing how we got to this historical milestone, let’s take a close look at where we have arrived in optics by examining the Meostar spotting scope. Built on a lightweight magnesium and aluminum alloy chassis that belies its rugged nature, this scope is protected with a rubberized armor that has a consistent and comfortable feel regardless of the temperature.

It’s waterproof to a depth of 6’ and shockproof. The nitrogen-purged tube is fog proof. It is capable of full, normal functioning down to -13 degrees Fahrenheit and up to 138 degrees Fahrenheit. Behind all the toughness is the greatest security device of all—a lifetime warranty.

These safety features are protecting an 82-millimeter objective lens fixed to an angled frame that supports multiple eyepieces, giving a 20-70X or 30-60X (wide angle) magnification with an objective focal length of 17.3”. The optional wide-angle eyepiece gives a 66-degree constant field of vision throughout the sight range of the scope. Relatively compact, the scope is only 13.4” long and weighs 3 pounds and 2 ounces. The lens is fluoride coated, distortion resistant ED glass that provides outstanding resolution and brightness with true color register in low light settings. Meopta has several proprietary coatings, among them MeoBright and MeoShield, that ensure constant brightness while preventing chromatic aberration. Also designed to handle the brightest sunlight, it’s equipped with a built-in sunshade.

Illumination and color are maintained across the entire field of vision, even at the highest magnifications. At 20X, the scope gives a linear field of vision of 351’ at 1000 yards, and has near focus at 13.6’. Focus is achieved through a large, easily adjusted center ring on the frame. Once focus is achieved, it stays put until the user moves it. 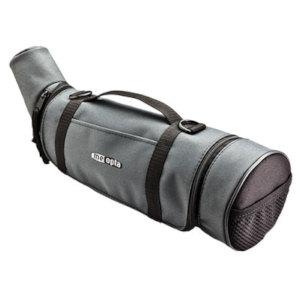 Meopta offers a wide range of accessories for the Meostar. These include a collapsible tripod with an optional S-rail for added stability and an eyepiece adapter that works with either available eyepiece. Meopta has done digiscoping technology one better. Not only does it offer the Meopix smartphone adapter, that allows a cell phone to be fixed to the optic for still photo or videos, but it also offers an actual camera adapter.

How Meopta got to America

The story of the intrepid individuals who founded what is now Meopta, how they survived the tumultuous history of 20th century Eastern Europe and what the company has become is almost as inspiring as the quality of the optics they produce. By 1933 the company, then called Optikotechna, found itself in Prerov, Czechoslovakia, where its mission was to produce quality lenses. So fine were its lenses and manufacturing processes that it was soon called upon to make a wide variety of optics, including riflescopes, cameras, projectors, and enlargers.

When the Nazis took over Czechoslovakia in 1939, the optical skill of Optikotechna was not lost upon them and the company was forced to manufacture military optics until the end of World War II. When the Communists followed the Nazis, a number of the company’s officers escaped to the United States and founded an American affiliate in Florida. It was between 1947 and 1970 that the renamed Meopta became one of the world’s largest manufacturers of motion picture projects. Finally, in 1992, after the collapse of the Soviet Union, the company was privatized under the leadership of those who had fled to America 50 years before.

Today Meopta manufactures an amazing array of products without having forsaken its original purpose: high quality, military-grade optic lenses. The company furnishes optics for medicine, aviation, digital projection, and even headlights. Why is this important for those of us interested in spotting scopes? Over 113 years of refining optics have given Meopta the ability to create near-perfect lenses.

Just as the company has evolved its ability to create the highest quality lenses for other industries, so it produces all its rifle and spotting scopes in a completely dust and moisture free environment with perfectly stabilized temperature to give each lens the same flawless perfection. It’s instructive to know as well that Meopta completely constructs its scope from start to finish, as another aspect of the company’s determination to produce the highest quality product.

What Do the Experts Think of Meostar?

Though not many American target spotters or hunters are all that familiar with Meopta or their optics, more and more researchers, avid sportsmen, and experts are becoming acquainted with the brand. There is one consistent feature across all their comments and reviews: the Meostar is an outstanding spotting scope in every respect.

Those hunters who have used the scope for game spotting consistently express awe that the resolution is so precise, particularly at the highest magnifications. It’s worth noting that many hobbyists and spotters have posted videos taken through the lens of the Meostar at high magnification, demonstrating the incredible resolution that can be achieved: for instance, the ability to count the number of bricks—and see their flaws—in a chimney at the distance of 1 mile.

Those who used the scope also commented on the surprising wide field of vision it provides at 20X. Many reviewers have remarked that you cannot truly appreciate the scope until you’ve had the opportunity to look through it.

Another agreed upon quality is the rugged durability of the scope during field trials and in the worst weather conditions—an important consideration given that it is surprisingly compact and light. There is also a general acknowledgment that clarity and illumination are maintained during low light conditions just before dawn and just after dusk.

Others reported sizing the Meostar up against Leupold and Kowa scopes that were similar in magnification range, and in all cases, the brightness and resolution of the Meostar met or exceeded that of these quality products. In one instance, the Meostar was tested against a Swarovski spotting scope, something many would consider the ultimate comparison. It was reported that the quality of the two scopes was virtually identical.

Of course, the ultimate challenge faced by any spotting scope is not how well it does in the manufacturing process or in comparisons with other scopes, but rather how it performs in the field. There is any number of fine scopes capable of charting target impacts at a few hundred yards. While the Meostar is certainly capable of this sort of task, it seems almost a waste of its greater ability.

This highest quality scope seems to fulfill its greatest potential with the spotter or hunter who is “glassing” in the field, minutely studying distant vistas for a particular objective, moving from the unusually wide field of vision the scope provides to the astonishing clarity at the highest magnifications when the user zooms in upon the desired target.

It is often said that, apart from a rifle, a hunter’s most used and most necessary accessory is a spotting scope. This device, if it’s of sufficient quality and range, enables the hunter to capture the entire panoply of a hunting field at lower magnifications, then select a specific area to view with razor sharpness.

With a worthy spotting scope, the hunter can watch the movements of entire herds, determine the best location for concealment and when to acquire it, and select particular animals to evaluate. High-quality spotting scopes bring the hunt to the shooter.

The pioneering creators of Meopta, however, would be quick to point out that even the exacting needs of a hunter in the field don’t begin to exhaust the true potential of a scope like the Meostar. After all, the first American users to clamor for this instrument were birders, who, like hunters, must be able to find their objectives in all light conditions at great distances.

Indeed the potential uses that the Meostar is uniquely qualified to fill are numerous. For instance, base and mountain climbers benefit greatly from having spotters who can observe their progress. Many sporting events, like marathons and boat races, take place over distances too great to be viewed from a single position—unless you have a device like the Meostar. For the sake of safety, predatory and venomous animals—not to mention swarming insects like hornets—can be observed casually with a spotting scope.

Speaking of safety, a scope like the Meostar is tremendously useful to peace officers, to security and surveillance officials, to ski patrols, and forest watchers. To be sure, the average nature lover does not require a spotting scope with the capability of the Meopta Meostar, but to have the opportunity to use such a quality device can completely transform the way one looks at nature.

The fruition of 113 years of diligent progress is available to us in the United States now thanks to the integrity and perseverance of the Meopta company. It has now released its outstanding spotting scope, the Meostar S2 for sale in America. Little known until recently, the Meostar has had a great reception among those who have had the opportunity to experience its amazing capabilities.

In particular, the scope maintains the highest levels of acuity, color consistency, and brilliance at the highest magnifications. Meopta seems to have thought of all the desires Meostar users will have, as it offers a wide range of options and accessories for the scope. Reviewers and sportsmen who have had the chance to use the Meostar rank it as on par with or even superior to some of the highest quality scopes now on the market. The evolution of the Meopta company in producing and perfecting lenses is continuing before us today.