The versatile, high-quality Maven S.1.S Straight Spotting Scope not only has a well-earned reputation for excellence but earned the 2016 Field and Stream “Best of the Best” award.

Those independent folks, especially outdoorsmen and hunters, in the great northwest have a reputation for keeping to themselves, especially staying quiet about exciting ideas and new developments. Periodically, however, some of the best innovations that make news out west come to be common knowledge across the country and even across international borders.

That’s what happened with the Maven S.1.S spotting scope. Developed by the Mavenbuilt folks headquartered in Lander, Wyoming, the S.1. S spotting scope quickly created such a buzz that Field and Stream Magazine bestowed upon it the cherished “Best of the Best” award in 2016.

In this article, we’ll review the specifications of the S.1.S and take a look at what makes people think it’s so special. We’ll discuss the virtues of this particular scoop design and hear what reviewers are saying as well.

The Maven S.1.S has a sister optic, the Maven S.1.A, which has an angled frame. Much of what makes the S.1.S an excellent, high-quality device is present in the S.1.A as well, though, it’s important to note that the differences between the two extend to more than the 1” difference in length (the straight scope is almost 16” long, while the angled version is almost 15” long). The real difference between the two, as we’ll elaborate on later in the review, has to do with the user’s preference and the specific viewing setting.

The Maven S.1.S has a large 80-millimeter objective lens and a magnification range of 25-50X. At 100 yards, the field of view for 25X is 115.2’ and for 50X it’s 83.8’. The scope has a focus range from five meters to infinity. The fluorite lenses, which use a Schmidt–Pechan prism mechanism for collecting light, are manufactured in Japan. They are coated with various layers for performance. These include die-electric mirror coating on the prism for accuracy and oil phobic and flat multi-coatings, designed to make the lenses resistant to oil, dust, water, smudging, and fingerprints; it also makes the lenses much easier to clean. The enclosed scope is nitrogen purged to prevent fogging.

Built on a magnesium polymer frame, the dimensions of the S.1.S are 15.9” x 3.9” x 3.9”. It features a built-in five group, a seven-element eyepiece with 17-18 millimeters of eye relief. The exit pupil for 25X is 3.2 millimeters and for 50X it’s 1.6 millimeters. For those wishing to use filters, the scope has 82-millimeter filter threading. It also features a built-in, adjustable sunshade at the objective lens. At just over four pounds, the S.1.S is on the lighter side of high-end spotting optics. Ruggedly constructed, it is rated to withstand temperatures from 40 below zero to 158 above zero Fahrenheit. Like so many other Mavenbuilt products, the S.1.S comes with a lifetime warranty.

Maven offers unique personalization with this scope for the purchaser who doesn’t mind waiting for an individually manufactured device. Mavenbuilt allows the buyer to select from several specialized features, including various camouflage patterns and rubber armoring. They will even engrave the instrument.

The Maven S.1.S in Review 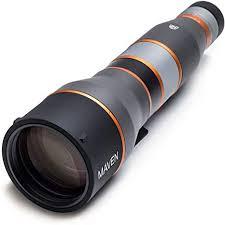 While the S.1.S has scant reviews on some of the better-known sales platforms, it has been rigorously examined and reviewed by scope optic experts. The result has been universal praise for pretty much every aspect of the construction and performance of the scope.

In particular, it should be noted that many reviewers pushed the magnification of the device to its maximum and marveled at the quality of resolution, clarity, luminescence, and color. From looking at the nighttime moon, the Wyoming wilderness, or a distant sunset, there seems to be something about the S.1.S that beckons viewers to the sheer enjoyment of using it for pleasure even before it’s put to the earnest work for which it was meant.

Because the S.1.S is digiscope enabled for Apple or Android phones, many reviewers delighted in hooking their smartphones to the eyepiece, pushing the scope to maximum magnification, then zooming their cellphone cameras to their maximum magnification and enjoying the crisp, clear resolution that resulted.

Reviewers were also consistent in describing the rugged character of the scope, mentioning the ample rubber armoring and the ease and functionality of the focus ring—even when handled with gloves—when quick adjustments were needed. The construction of the frame not only withstands extremes of temperature but allows for safe, comfortable handling in the hottest and coldest weather. With a fixed eyepiece, there is little chance for even the finest dust to get into the body of the scope.

How well does the optic work? Multiple reviewers describe the excellent job the Schmidt–Pechan prism and fluoride lenses did of preventing chromatic aberration and other distortions. In low light conditions, the scope is particularly adept at accurate resolution and maintaining light transmission, or to paraphrase one reviewer, looking through the scope at dusk through full magnification still allows you to tell the feathers from the ferns. Another noted that .17 caliber rimfire impact holes on a target were sharply visible with the S.1.S at 100 yards. 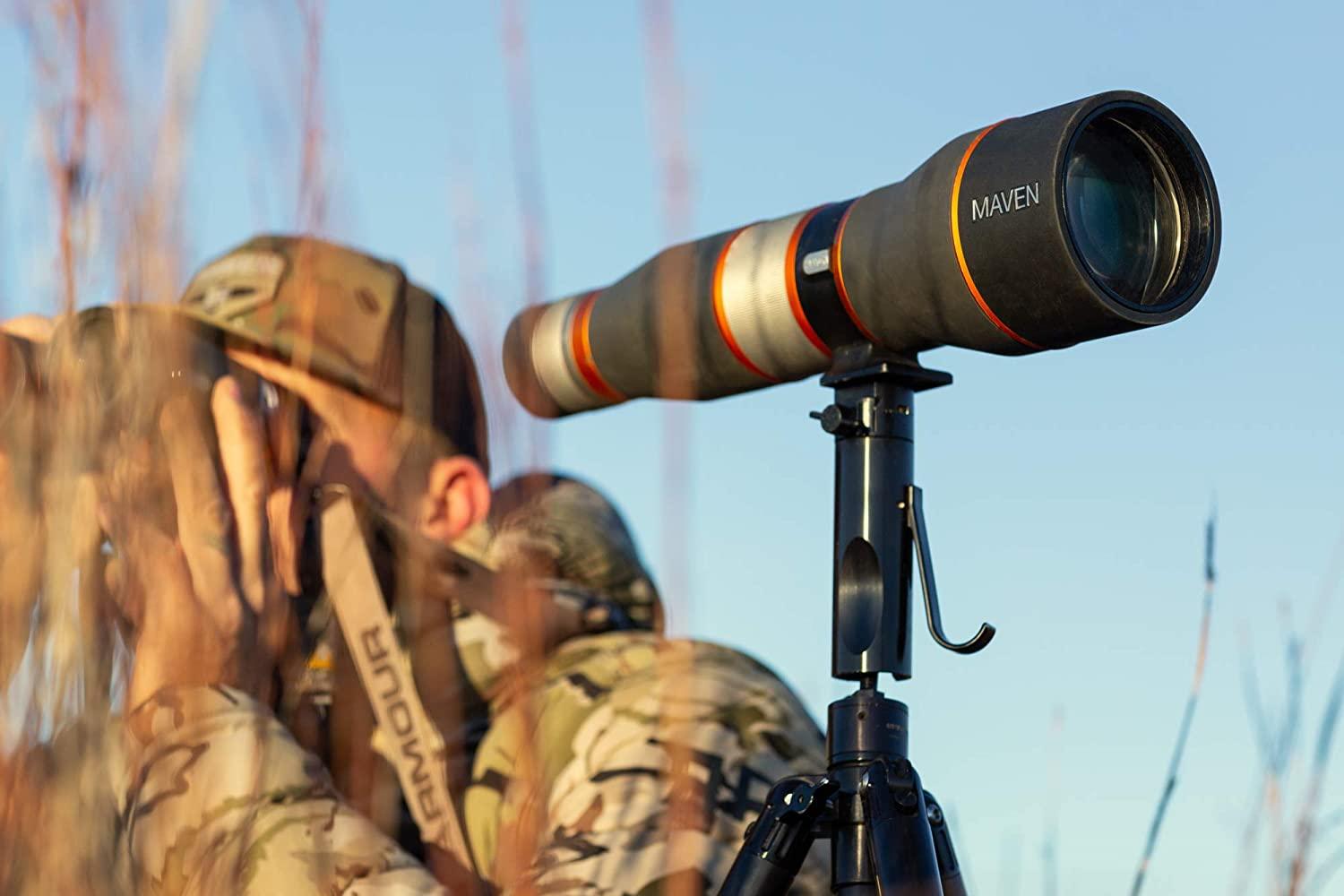 Most reviewers were eager to compare the S.1.S to other spotting scopes. Again, the Mavenbuilt scope was recounted as performing as well or better than others. When compared to a Swarovski ATX models, the S.1.S held its own—even in low light transmission and distance resolution, those aspects in which Swarovski is known to excel. The Swarovski typically runs about twice the cost of the S.1.S. Others put the scope up against other competitors, in particular Redfield and Vortex. In all cases, the Maven scope excelled. When compared to lower-cost scopes, the S.1.S prevailed as expected, demonstrating why it is so highly regarded.

To be sure, the cost of spotting scopes should become part of the discussion. The budget-conscious user must be assured of receiving the best value for the price to be paid. If there is one bit of advice spotting scope experts repeatedly give, it’s that the purchaser of a spotting scope should endeavor to get the best scope that he or she can afford.

This Mavenbuilt scope occupies that place amid spotting scopes where the buyer knows that she or he must commit to making a significant purchase, yet also is receiving distinct value for the money spent. Mavenbuilt also has a well-earned reputation for innovations in manufacturing and also in the marketplace to keep the cost of its products as reasonable as possible. After all, these are the people who want to customize the scope you’ll buy and use for decades.

Another way in which Mavenbuilt demonstrates personalization for its buyers is in the fact that their outstanding spotting scope comes either in an angled or a straight version. Since the two S.1. scopes would seem to nearly identical, a buyer might wonder why Mavenbuilt would not simply select either the straight or the angled model and produce it. Why is the company so attuned to user preference?

A full understanding of the use of spotting scopes brings light to the issue and reveals the intention behind the two different versions of this excellent device. To be sure, most spotters have a distinct preference for either the straight or angled design. Beyond accommodating the great number of users who prefer a straight frame, however, the S.1.S recognizes that there are those occasions when a straight body scope has distinct advantages over an angled body scope.

It’s important to acknowledge that a fair percentage of spotting scope users prefer the angled design. They contend most often that it is easier on the neck and more restful on the eye to look down into an eyepiece than look straight ahead. This may be in large measure the reason we see so many spotters at shooting ranges and contests using an angled lens to watch for target impacts.

With quality angled lenses, the eyepiece can be rotated as much as 360 degrees, so the user can turn from a notebook or scoresheet and look directly into the spotting scope eyepiece. One might cynically note that, in such circumstances, the user isn’t looking down at all, but sideways. With a straight scope, of course, there is no need to rotate the eyepiece, although it is necessary to move one’s head behind the scope and then away.

Where a straight frame spotting scope has a distinct advantage, however, is in the field when spotters or hunters are “glassing.” Glassing is the term used for using optics to study an area for an objective, that is, a target image—usually animals, birds, or, for hunters, game. Glassing is as unique as the individual spotter. Some exclusively use the spotting scope to make overlapping sweeps of the target area to find the objective. Others begin their search with binoculars, which offer magnification and a slightly larger field of vision than the spotting scope; then, when an objective is found, the spotter switches to the scope.

Still others make panoramic sweeps with the unaided eye or they use unfocused vision to watch to tiny movements, which is something the human eye is particularly adept at; then, they use the spotting scope to focus and magnify the objective they have spotted.

To grasp the advantage of the straight spotting scope frame, one must imagine oneself in a natural setting, having just seen the desired objective at a couple of hundred yards—something that can be accomplished either with the unaided eye or binoculars, depending of course on the size of the objective. An angled spotting scope is seated lower when on a tripod than a straight frame scope since one must lower the head to look down into the eyepiece.

Part of what makes this so much easier is that the spotter learns to use “landmarks” to maintain contact with the objective. Suppose a mule deer is the objective. When the spotter finds the deer with binoculars or the unaided eye, she or he notes the nearest landmark: a tall tree, an unusual rock formation, etc. With a straight body scope, it’s possible to keep the landmark in view as the user moves into position on the spotting scope, for a relatively seamless transition.

To be sure, conditions in the field are never as simple and never work as smoothly as we imagine in our planning. Practicing the movement from a landmark seen with binoculars or the unaided eye to the spotting scope ensures that, in the exciting moment you have to make that transition, it can be adequately accomplished—especially with a straight frame spotting scope.

Long known for well-crafted, high-quality rifle scopes and binoculars, Mavencraft has moved into the spotting scope field with spectacular results. For the naturalist, birder, shooting spotter, or hunter, the Maven S.1.S scope is an outstanding choice that may be personalized to an amazing extent. Beyond bragging rights, though, the true worth of the S.1.S scope is demonstrated in the field, where its legendary light transmission, lens clarity, and remarkable resolution place it with the very best spotting scopes.

It’s worth noting that every feature of design, construction, and function has been roundly praised by experts in the field of optics.