Once solely used by the military and first responders, thermal imaging is now available to private citizens who need to “see” with no visibility. What’s the best thermal monocular?

Thermal imaging technology has made enormous strides since its strategic inception during the war in Vietnam. As the quality of thermal imaging devices, especially thermal monoculars, has improved, the price of these units has correspondingly declined. Today they’re available and much liked not just by law enforcement and firefighters, but by outdoorsmen, hunters, and adventurers.

Thermal imaging works by gathering infrared light, which can permeate and be detected where there are no visible light waves or where thick smoke, fog, or permeable barriers—like dense undergrowth—prevent normal vision. Infrared can be broken into three basic wave measurements. The most useful of these is “thermal-IR,” which is the basis for the thermal monocular devices we use to find heat signatures.

The first thermal monocular we’ll look at comes from the legendary Leupold company, internationally known for the quality of its rifle scopes. The LTO Tracker 2 is 7.3” long and weighs seven ounces. With a 600-yard heat signature detection range, the LTO has a 240 X 240-pixel resolution display; it’s well-liked for hunting. The 30Hz frame rate allows the LTO to offer a 14-degree field of view.

With its Beacon mode, the screen can recalibrate quickly to differentiate well between objects with similar heat signatures. Its thermal sensors can also track blood trails for hunting. The unit has six available color palette options. The unit functions equally well day or night.

Leupold stresses the construction and durability of this monocular. Made of aluminum housing and Gorilla Glass, it’s waterproof, shockproof, and fog proof. The entire unit is fully American made. In price, the LTO fits in the middle of the thermal monoculars we’re reviewing.

The Leopold LTO ranks in the top 100 of thermal monoculars and, with 132 reviews, has received 4 of 5 stars. Reviewers like the LTO, favorably comparing it to the Flir Scout series. Many reviewers like it for hunting, security, and just plain fun. Unlike law enforcement thermal detectors, which can take time to boot up, the Leupold LTO comes to life swiftly and has a good refresh rate. 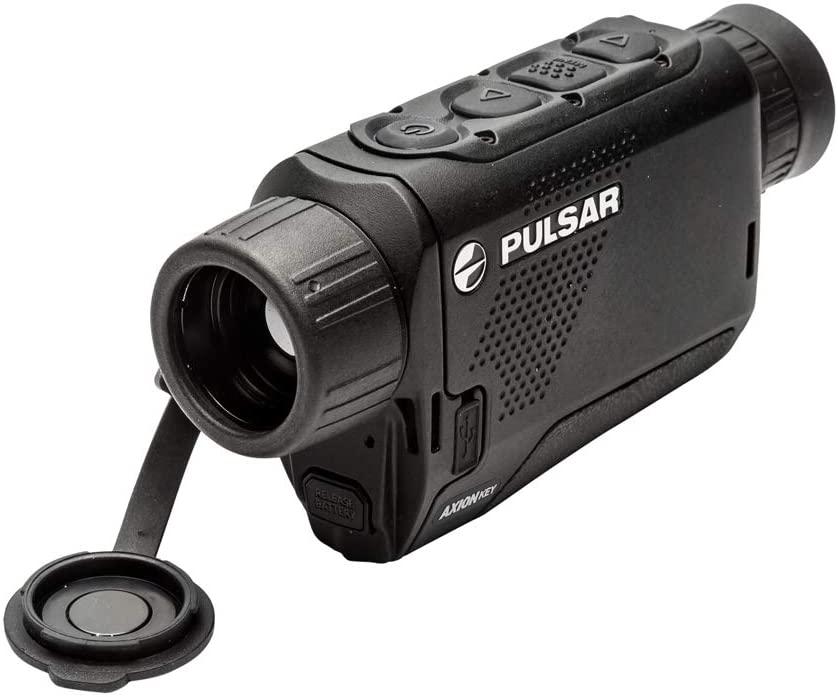 With a 1300 yard detection range through its thermal sensors and an outstanding field of view, the Pulsar Axion Key has a 320 X 240-pixel resolution. It features a continuous digital zoom that can be stepped to 2X or 4X and renders a “picture in picture” zoom image. It features a hi-def AMOLED 960 X 720 LCOS microdisplay with eight color viewing modes. The Axion Key is TIC enabled, with a built-in video recorder and 16G of internal memory capable of photos or videos. Beyond the built-in video capability, the Axion Key can stream to a smartphone or tablet using Wi-Fi and the Stream Vision App.

Pulsar also stresses the rugged construction of the Axion Key monocular. With lightweight magnesium alloy housing, it’s rated IPX7 waterproof. The thermal monocular uses an included rechargeable battery for the best battery life and comes with a USB cable and quick start guide. The unit is extremely lightweight and compact and boots up quickly.

The Axion Key is a high-end device, though not the highest-priced unit in our review. Rated 4 out of 5 Stars by its 17 reviewers, the Axion Key is ranked #16 in Night Vision Monoculars. 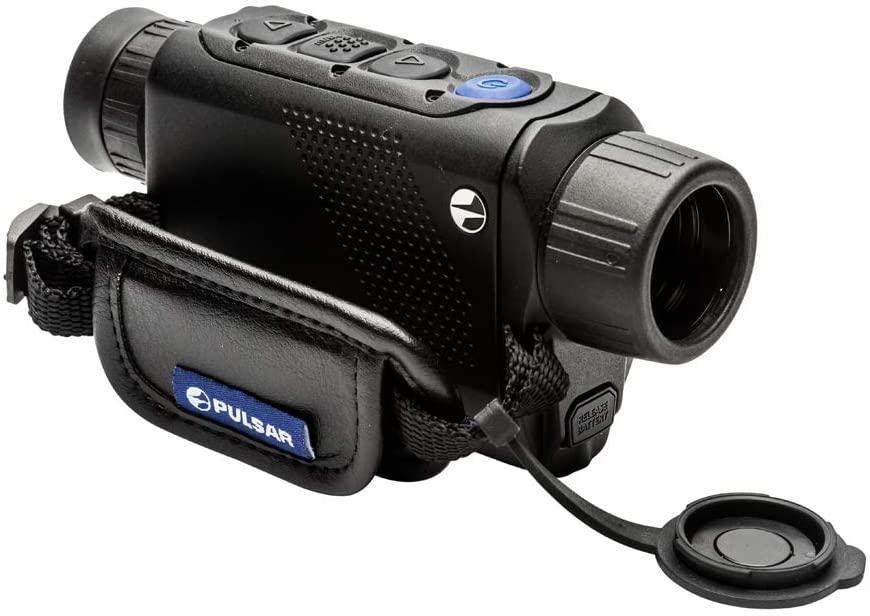 The second Pulsar Axion we are reviewing, the XM30, is the highest priced thermal monocular in this group but may be the best value in its class. Offering the highest magnification available in a compact thermal monocular, the XM30 is designed to be operated in one hand fits comfortably in a pocket. It offers outstanding video recording. Designed to be compatible with smartphones and tablets, the magnification of thermal images can also be enhanced with the zoom function of other thermal monoculars. Of course, the XM30 itself has a built-in digital zoom up to 4X. Wi-Fi enabled, the XM30 is capable of streaming to other devices and is easily adapted to last updated firmware upgrades. The monocular has a built-in internal memory of 16G.

The XM30 boasts a 320 X 240-pixel resolution microbolometer resolution sensor. The picture in picture digital zoom has a 1024 x 768 HD AMOLED microdisplay with an eight-color palette and white-hot resolution. Amazingly, the 4 X 16 extended magnification allows a detection range for heat signatures to 1450 yards with its thermal sensors. Weighing half a pound, the monocular is constructed of a rugged magnesium alloy. It’s powered by a built-in APS3 rechargeable battery to give lasting battery life and sports a three-year warranty.

As is so often the case with premier, high-end thermal monoculars, there are fewer reviews to check with the XM30. It has received 4.5 of 5 Stars in its eight ratings and ranks #76 in Night Vision Monoculars. 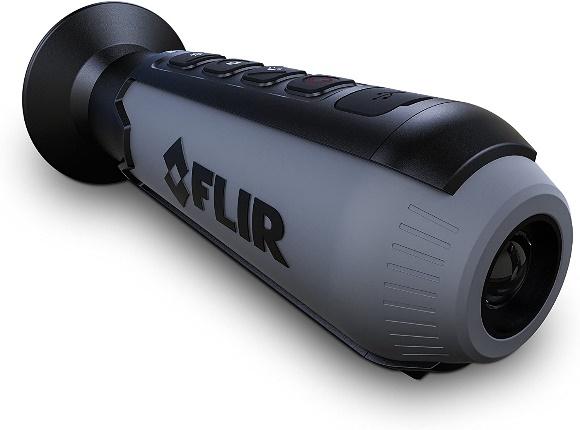 One of the better known thermal monoculars—the Flir Scout is the thermal monocular to which others are compared. The FLIR Ocean Scout TK, living up to its name, has concentrated on marine life service. Priced near the middle of all the thermal monoculars we’re reviewing, the FLIR Scout TK was designed to be a compact, handheld thermal imager enabling those in aquatic settings to see boats and other vessels as well as marine life in complete darkness with its sensitive thermal sensors.

The FLIR Scout TK is the very essence of simplicity, yet has a great array of built-in features. TIC enabled, it’s capable of still photos and video recording, it can store up to 1000 thermal images with a variety of color palettes to chose from and what may be the best overall refresh rate. Pocket-sized, the FLIR Scout TK weighs one pound and is powered by three included lithium-ion batteries.

Ranked #20 in Night Vision Monoculars, the FLIR Scout TK sports a 3.7 out of 5 Stars rating and has received 27 reviews. Several commented on how much fun it is to use the device and how simple it is to operate. Law enforcement officers report success in using the FLIR Scout TK to locate and apprehend criminal suspects.

The JStoon Night Vision Monocular is the first of two budget-conscious imaging monoculars we’ll review. The JStoon promotes itself as a great thermal monocular device for beginning users. That doesn’t mean the monocular doesn’t have plenty of functional features. The fixed 3X magnification can be extended to 4X. The 850NM infrared illuminator does a great job of locating heat signatures in complete darkness with its thermal sensors, but it can also be used during the day and has an outstanding refresh rate. 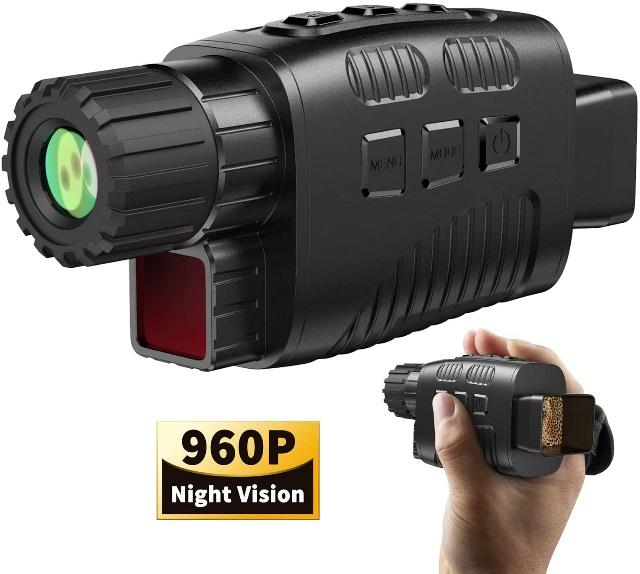 Visuals are an outstanding feature of this inexpensive monocular. The JStoon possesses a simple video interface and can store five hours of 960P videos or 30,000 1280 X 960-pixel photos. The monocular is powered by five alkaline batteries. The palm-sized device weighs 6.3 ounces and is water-resistant. It comes with a built-in tripod attachment, a carrying strap, and a money-back guarantee. Since it’s so compact, the JStoon is recommended for law enforcement observation, security surveillance, camping, and watching wildlife.

This thermal monocular boasts 4.5 out of 5 stars and is ranked #5 in Night Vision Monoculars. 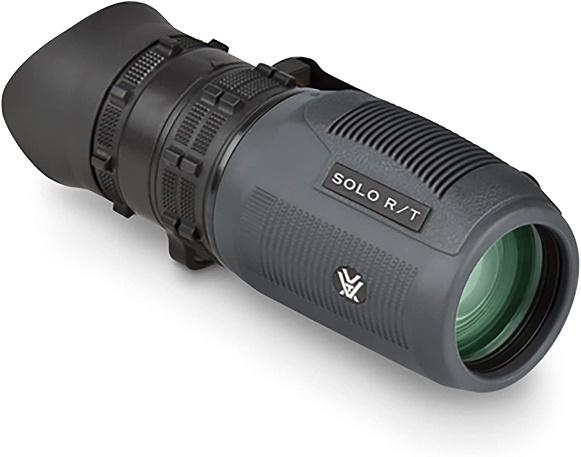 The final monocular to be reviewed, the Vortex Solo R/T, comes from one of today’s most highly regarded optics makers. While this is one of the least expensive models, Vortex takes this monocular quite seriously. The “R/T” stands for “Recon Tactical.” A true smart rangefinder, it sports a 36-millimeter objective lens and 8X magnification. Its portability makes it outstanding for hunting in the field as well as law enforcement. It’s designed to be used under extremely low light conditions.

As with other Vortex products, this thermal last updated monocular comes with an O-ring sealed, nitrogen-purged frame to make it fog proof, waterproof, and shockproof. Though it is not an infrared monocular or thermal imaging device, it provides spotting and range finding in low light conditions.

Not surprisingly, the Solo R/T has earned a 4.5 out of 5 Stars rating. It comes in at number #45 in monoculars.

Who Makes the Best Thermal Monocular?

The answer to this question is entirely contingent upon the buyer’s budget. At the high end, Pulsar offers two of the best thermals available: the Axion Key and the Axion XM30. Each of these monoculars offers on-demand video with outstanding color palettes. The XM30, the more expensive of the two, has the wider field of view and longer detection range, making it seem the best at the top end. If we evaluate by sheer popularity, the highest-rated is also the least expensive and simplest to use: the JStoon Night Vision, which was given 5 Stars by 77% of its reviewers.

What Is the Best Thermal Imager?

While the Pulsar thermal monoculars tend to focus on detection range and video quality, the Leupold LTO and the FLIR Scout each indicate real investment in producing recognizable images from the heat signatures they detect, which is particularly important for hunting. With each of these imaging monoculars, reviewers especially like the quality of the images.

Thermal vision is night vision, just with different energy rays. Night vision scopes do a magnificent job of magnifying available light; sometimes, when it seems there is complete darkness. Thermal vision, on the other hand, can detect images when there is absolutely no visible light whatever because the thermal sensor uses infrared rays emitted by heat. In this sense, pure night vision scopes are limited. A thermal monocular is the one to get since it can be used in the darkest night and broad daylight.

What Is the Best Handheld Thermal Camera for Hunting?

As with the questions above, it’s difficult to name the best overall thermal imaging monocular. As much as we like them, we can eliminate the Leupold LTO from consideration because it does not have a camera and the Vortex Solo R/T since it isn’t a thermal imaging device. Any of the four remaining are compact and rugged enough for use in the field. In terms of sheer versatility, the recently updated Pulse Axion XM30 has the best features. The most revered and reviewed, however, is undoubtedly the FLIR Scout.

Regardless of one’s budget considerations, there are several outstanding thermal imaging monoculars on the market. With an amazing range of accessories and differing purposes, it’s probably impossible to simply name the best overall, but there is one out there you will definitely like, and that’s the one to get!