Look Up or Down, a Celestron C90 Mak Spotting Scope Is the Best Around

Meta: With its multitude of features, accessories, and functions, it’s easy to see that the Celestron C90 Mak Spotting Scope is a dream come true. The modest price only adds to its outstanding value.

There are a great many uses for spotting scopes. It’s important to start on that note because so many us believe our specific need for a spotting scope is the only real one. Target spotters and shooters, hunters, bird watchers, conservationists, astronomers, security officers, peace officers, videographers, ranchers, and nature lovers all believe theirs is the most legitimate purpose for having a spotting scope. Just so, there are many different spotting scopes available, each seeming to have been designed to serve certain select users. Is it possible that there could be a single scope that possesses the ability to serve every potential use for a spotting scope?

In this review, we’ll take a close look at the specs, the performance, and the reviews for the one scope that just might fit the bill for all those distinct purposes. The Celestron 52268 C90 Mak Spotting Scope is universally admired by its users and it continues to demonstrate its worth by amazing us every time we put it to the test.

Celestron’s C90 is uniquely made with a Maksutov-Cassegrain optical construction design. The name “Mak” in the description is a reference to this design. This particular telescopic arrangement allows the internal lenses of the scope to be fixed in a permanent alignment. The result is a particularly sturdy and simple scope. It also tends to make the scope compact and portable. All these characteristics perfectly describe the C90: it’s rugged, compact – at least for its powers of resolution, lightweight and portable.

One other important aspect of a Mak design is that it creates an “erect image system” for the scope. You may have gazed through a celestial telescope at some point and realized that the image you were seeing was upside down—it was an “inverted” image. The Celestron C90 describes itself both as a terrestrial and celestial spotting scope. If you do use it to look at the heavens, you’ll see the man in the moon right side up because the C90’s image is erect, not inverted.

The Celestron comes with a default 32mm Plossl folding eyepiece that allows an amazing 39X magnification and 20 millimeters of eye relief. An alternate available eyepiece, a 1.25” standard astronomy ocular, can be substituted, giving even greater magnification and a wider field of view. Both the eyepieces and the objective lens are coated with Starbright, a proprietary coating developed by Celestron to dramatically increase light transmission.

Terrestrially—looking out rather than straight up—the C90 provides a 67’ field of view at 1000 yards. The closest focusing distance is 15’. With the sort of magnification the C90 offers, a “finderscope” must be also attached. A finderscope is a smaller, parallel scope that helps the aim of the main scope. With the C90, the finderscope itself has 8 X 21 power and also has an erect image. The full scope is only 12” long and weighs less than 5 pounds. The achievement of the amazing optics and design present in the C90 is the result of Celestron refining its scopes for over 50 years.

The scope comes with T-adapter threads on the ocular to allow easy attachment of SLR cameras – that is, “single-lens reflex,” or cameras that focus through the eyepiece – bodies and their accessories. This practice is called “digiscoping” or the ability of a scope to allow photography and videos. Speaking of which, if clothes make the man, accessories make the spotting scope. The C90 comes with a padded nylon backpack to safely transport the scope. In the pack, you’ll find an instruction manual along with lens caps and cleaning cloth, eyepieces, and objective covers. Another important accessory is the unique Heavy-Duty Altazimuth Tripod that has a slow-motion control that steadies the scope for constant focus. It’s attached to the scope with a dovetail mounting bracket. All of this is part of the Celestron 52268 package that comes with the C90

The C90 is designed to be pointed not only at the horizon—or the birds in the trees a half-mile away—but also the planets and stars. Available from Celestron is an amazing array of eyepieces that fit the C90 perfectly and allow astonishing magnification.

A Scope with Many Abilities

The Celestron C90 Mak Spotting Scope has lots of impressive attributes, but exactly what can you do with them? Understandably the first thing to do is take a look. The internet is full of a multitude of videos taken through the C90. It’s no stretch of the imagination to say that this scope is likely the finest and most used inexpensive tool for digiscopers on the net.

The functional range of the scope is extraordinary. Most terrestrial videos posted of people by C90 users seem to fall into the 900-1200 meter range, or between a half and three-quarters of a mile. At this distance, facial expressions, motion, and nuances of posture are easily seen. Terrestrial videographers not only capture images at great distances but also use the magnifying power of the C90 to capture natural images that are astonishing. Some videos show mites hopping off birds as they preen and a squirrel with a runny nose. 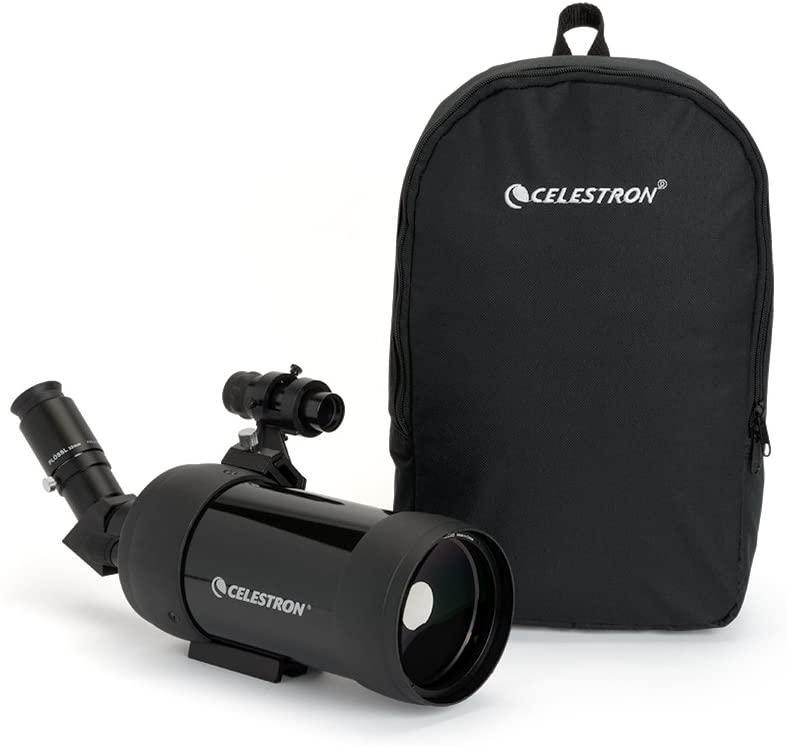 The desire to turn the spotting scope skyward seems to be irresistible. There are a great many videos of the stars and solar system as viewed through the C90. With little extra amplification, the scope reveals the moons of Jupiter, Saturn’s brilliant rings, and the different colors of the Martian poles. Pushing the magnification toward its theoretical maximum—215X—some have made videos of the identifiable bands surrounding the planet Jupiter. The moon has not escaped the surveillance from the C90 either, as many astrodigiscopers have used “stacking” images to achieve astonishing clarity of lunar features, including the landing site of Apollo 15. Stacking is the use of software to combine multiple images, resulting in a single, clear image with a much greater field of view.

As indicated, in the section on specs, there are many astronomical eyepieces available for the C90. Beyond using a T-ring and camera attachment, however, several tech-savvy digiscopers have attached their smartphones and tablets to the C90, allowing amazing images to be streamed and downloaded.

Photographers and videographers, however, are not the only people who enjoy using the C90. Perhaps the single greatest group of users are target shooters. Many individuals report being able to spot small caliber target impacts at great distances, even .223 impacts at over 500 yards using the 32-millimeter eyepiece that comes with the scope.

While sighting and hunting users make up a great percentage of C90 users, there is also a great number who just want to look at the skies. C90 astronomers report being able to see nebulae, the Andromeda galaxy, and open star clusters. It’s been reported that other deep space objectives can be seen if a dark sky is available.

Surprisingly, many folks combine the spotting capability of the C90 and the star watching capacity of the scope. Some report taking the C90 to the target range during the day, then to “star parties” at night.

It has been noted that the C90 is a tremendous value for a modest price. Many quality accessories can be added to this inexpensive scope and they function quite well. Experts scope reviewers have noted that the C90 makes a great scope for students as well as a wonderful first scope for spotters and stargazers.

What Do Reviewers Have to Say?

Given that there are spotting scopes—not to mention celestial telescopes—around that cost ten to twenty times the purchase price of a C90, you would not expect anyone to think that the C90 is perfect or that there aren’t other, better scopes out there. Let’s take a look at what reviewers have had to say about the C90 to see if we can find some consensus on pro and con comments. We should be aware going into the review process that the Celestron C90 Mak Spotting Scope packs a 4.5 out of 5 Star rating with 66% of reviewers giving the instrument 5 Stars. It ranks #35 in spotting scopes.

Looking first at the generally positive comments, reviewers tended to say foremost that the C90 was well worth the purchase price. A surprisingly large number of reviewers praised the C90 with the very same phrase. They all commented that the scope was a lot of “bang for the buck.”

For many individuals, it was the first scope they ever owned, and either they became so attached to it that they never upgraded or they were so inspired by it that they moved up to even finer spotting scopes and telescopes. Reviewers were surprised and delighted by the size and weight of the C90, especially in light of the wonders of which it’s capable. While a small minority of reviewers had to deal with imperfections, by and large purchasers found the C90 to be well-built, rugged, and able to perform as needed.

A fair number of people compliment the C90 on its worth as a spotting scope, describing amazing optic achievements like reading the small print on objects at 150 yards or seeing the barcode on the face of paper target at 100 yards or seeing impact strikes on a metal target at 600 yards.

Another commonly reported praise was from reviewers who successfully upgraded their C90s with available equipment. The adaptability and flexibility of the scope may be its greatest strength.

What about the critical comments people have made? Oddly, the most frequent negative reported was not about the scope but about the various tripods upon which users have mounted the C90. There don’t seem to be many negatives about the Celestron tripod intended for the scope, but often those who use other tripods have trouble maintaining focus when the tripod isn’t steady. This is especially true when looking at the heavens or the shooting range. Frequently people have counseled using a counterweight on the tripod.

Finally, some users have mentioned that the scope loses sharp resolution at the edges when pushed to its maximum magnification. This seems to be the case, especially with terrestrial and not celestial users.

The Celestron C90 Mak Spotting Scope is a marvelous instrument for many terrestrial uses, especially target spotting, birding, and surveillance, as well as a wonderful entry-level celestial telescope. The C90 is amazing for several reasons, beginning with its optical performance. Widely used by photographers and videographers, the C90 could have its internet channel of amazing videos taken with it by digiscopers.

Perhaps the C90’s greatest strength is its adaptability. Viewers report successfully using the C90 to study everything from targets 600 yards away to the moons of Jupiter. It is no exaggeration to say that the scope has accomplished just about everything that has been asked of it.

Reviewers express a real enthusiasm for this Celestron spotting scope, elaborating on their praise by comparing it favorably to other, more expensive instruments. Among the most frequent compliments bestowed upon the C90 is that it is well worth the money paid for it. Indeed the versatile, beloved C90 is one of the greatest market values in spotting scopes. One could buy the C90 and each of the many available accessories manufactured specifically for it and still pay hundreds less than for any comparable scope.