Bushnell, a leader in scopes, combines excellence with value in its Bushnell Trophy XLT 4-12 X 40 Riflescope. It’s all about optics with this scope’s light transmission and Multi-X Reticle.

Riflescopes can amaze the shooter in a great many ways today, from illuminated color displays to video recorders and computerized ballistics. Then there is the old fashioned sort of amazement we feel called “sticker shock,” which is what happens when we see how much some of these tech advancements in optics are going to cost. However, there is a different and delightful sort of amazement we feel when we discover something of real worth and are astonished to see how affordable it is.

This is certainly true of the Bushnell Trophy XLT Riflescope. The Trophy XLT carries on the 50-year tradition of quality, functionality, and economy that has long been the hallmark of Bushnell products. In this review, we’ll have the opportunity to examine the Trophy XLT up close, inside and out. We look at where it fits in the Bushnell heritage and how well the scope fulfills its promises. Of course, we’ll have a chance to listen to the voices of those who have reviewed the Trophy XLT as well.

At first glance, the flat, matte black finish of this 13″ scope seems classic and unassuming. Because it looks so traditional, it’s easy to overlook the special features and the quality construction that go into the creation of the Trophy XLT. The body of the scope is a single-piece construction through a 1″ diameter tube that, according to Bushnell, is practically indestructible. The turret saddle is integrated into the tube. That doesn’t mean the makers haven’t gone out of their way to add lots of precautionary safety features. Nitrogen purged and sealed with O rings, the Trophy XLT is fog proof, waterproof and shockproof. Bushnell intends that this durable scope will last you a lifetime. 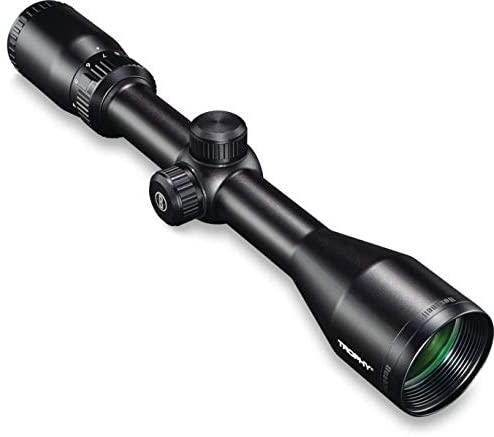 What sort of optics is this rugged frame protecting? The Trophy XLT has a 40-millimeter objective lens and a 4 X 12 magnification range through multi-coated lenses that capture a class best 91% of available light. The side focus parallax adjustment effortlessly moves from a near focus of 10 yards to infinity. At 100′, the 4X magnification offers a 29′ field of view, which at 12X magnification narrows to 10′. The Trophy XLT features an adjustment range of 60″ at 100 yards. Using the classic MOA (minute of angle) type adjustment, the scope is set at 1/4″ per click, or 15 MOA at 100 yards. One feature of the adjustments that are often appreciated is the solid sound that comes with each click. The Trophy XLT offers an eye relief of 3.5″ and an exit pupil of 10 millimeters. 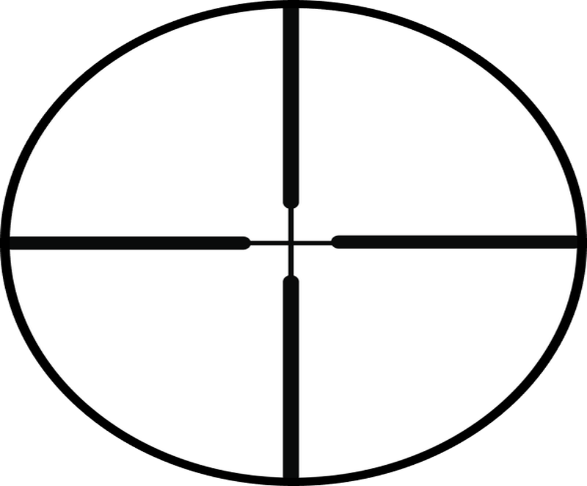 Of particular interest is the Multi-X Reticle. The Multi-X reticle, a basic reticle view, gives the user a very traditional crosshair perspective of the target. The intersection of the vertical and horizontal reticles is, of course, referred to as the “point of aim.” The location at which the fired bullet hits the target is called the “point of impact.” When the point of impact falls below the point of aim, which is the expected occurrence as the distance from the rifle to the target increases, it calls upon the user to adjust—or calibrate—the reticle. During this time, the rifle is held steady and the reticle is adjusted until it comes to rest on the point of impact. At this juncture, a second shot should be fired and it should have an identical point of impact to the first, which means the scope is sighted in at that distance.

The extremely versatile Trophy XLT is a favorite of rimfire shooters (those using small-caliber rounds, like .22), centerfire shooters (larger rounds typically used for long distances, and game hunting) as well as air gun shooters (pellets powered by compressed air). The ability to accurately hit targets from 10 yards to 100 yards requires the attention to detail for which the Trophy XLT has become highly regarded.

The Place of the Trophy XLT Riflescope in the Bushnell Family

Optics, product development, and global reach are all part of the Bushnell story going back to the legendary honeymoon of founder David P. Bushnell. In 1948 he reportedly traveled from California to Japan with his new bride. They returned with a load of Japanese binoculars, which they promptly sold. One of the most astonishing things about the tale is the realization that Japanese optics, which today are considered state of the art, were universally considered shoddy goods in the years following World War II. Bushnell was a pioneer in changing this perception, and that was just the start.

Bushnell provided the specifications for quality optics, and different nations along the Pacific rim provided the materials and workmanship. Soon he was importing spotting scopes and riflescopes to which he held the patents. Eventually, the company became involved with other well-known optic creators like Bausch & Lomb and Tasco. Long after Bushnell’s retirement, his penchant for quality and workmanship in optics continues.

Along the way, Bushnell developed telescopes, sunglasses, cameras, flashlights, and GPS devices. Above all, however, the Bushnell company has remained true to its international flavor and the development of high quality, affordable rifle scopes. The Trophy XLT, American in design and purpose, is manufactured in South Korea. The Bushnell brand is America’s top-selling riflescope.

What Can the Trophy XLT Riflescope Do?

Some might assume that since it rated well with air gun owners and isn’t suited for distances over 500 yards, the Trophy XLT isn’t suited for larger centerfire rifles or hunting substantial game animals. Shooters consistently report, however, that they have mounted the scope on mid caliber rifles and taken deer and coyotes beyond 150 yards with no problem. By the same token, air gun owners are sold on the Trophy XLT. The scope has been tried out on a variety of quality air guns, including Air Force, Beeman, Gamo, and Crossman, all with the same result—accuracy across the full effective range of the rifle. 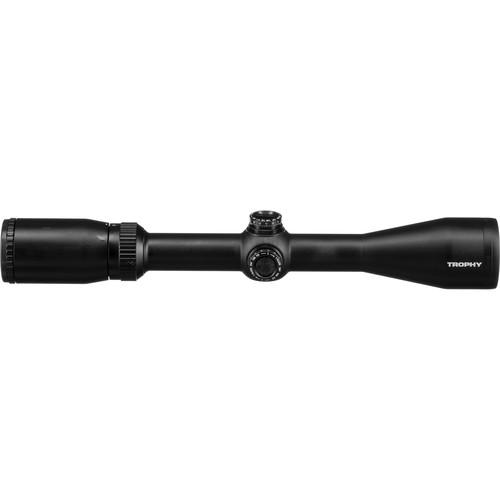 The scope is clear enough at 12X that shooters report seeing their .223 impact marks at 200 yards. It has also been noted that the Trophy XLT, with its superior light transmission ability, can provide more than adequate low light clarity. This turned out to be essential to one shooter who was able to target varmints in low light at 200 yards.

What Do Reviewers Have to Say About the Bushnell Trophy XLT Riflescope?

We should note first that this particular model is only one in an entire family of similar Trophy brand Bushnell riflescopes. While close in the manufacturing process and sharing some of the same specifications, these scopes are all distinct from one another and, therefore, separately reviewed. The Trophy XLT with Multi-X Reticle has only received 27 reviews and holds a rating of 4.2 out of 5 Stars. More than half its reviewers have given it a 5 Star rating.

Among several noteworthy themes mentioned, the Trophy XLT was recorded as being placed on a tremendous variety of different rifles—from a Gamo Whisper pellet gun to a Remington 30-06 and a Ruger 22. The great versatility of the Bushnell scope was able to accommodate the different challenges posed by each rifle. Among the other weapons mentioned upon which the Trophy XLT was mounted were a Hatsan air gun, RWS 54, Ruger 30-06, and Martin 22. It’s difficult to imagine another rifle scope with the capacity to handle so many different unique rifles.

Another topic repeatedly raised by reviewers was the unexpected brightness of images that results from the scope’s remarkable light gathering ability. Several remarked that the sort of vivid clarity they experienced through the scope would typically be expected only from a much more expensive instrument.

If the Trophy XLT is surprising in the variety of rifles it matches up with, it’s equally surprising in its effective range. Some purchased the scope intending to focus solely on targets within 15-25 yards and ended up being able to impact targets at ten times the distance. A 30-06 shooter spoke of successful targeting to 400 yards and another reported grouping shots within a 1/2″ circle at 150 yards.

A big part of the Trophy XLT’s consistency is its ability to hold zero even in the face of powerful recoil—both from centerfire rifles and air guns. A common statement was that it was easy to get the scope to zero, and once it was there, it stayed put. Of course, recoil is not the only impediment to a scope holding zero. The Trophy XLT is ruggedly built to hold the sort of rough handling a sport rifle receives in the field. Some reviewers remarked that dropping and jiggling the scope did not cause it to lose zero, either.

One of the most frequent praises bestowed on the Trophy XLT was that it is a great scope and, in particular, a great scope for the money. The general tone of most reviewers was that of surprise and delight—the Trophy XLT exceeds expectations, from the moment you mount it on your rifle through the 500th round that impacts the point of aim.

Just as the optic products of the Bushnell company across the board—from GPS devices to microscopes—must strive for the heights of precision and accuracy, so the Trophy XLT is a compact statement of great quality. From its rugged housing to its sealed lenses to its faultless turrets, everything about the scope speaks of dedication to consistent performance, precision, and durability.

The story of the Bushnell company, from its simple beginnings to becoming a great, multi-national company, is a story of progress, a vision that continues and evolves with the changing of nature of the world. Just so, the design of riflescopes has changed dramatically, and the chapters of scope evolution have played out in the Bushnell riflescope. A company does not become the number 1 riflescope provider in the nation without being in step with the times. The Trophy XLT and its sister scopes are an expression of the progress that continues to evolve, even as the scope itself is made to endure.

Then there is the issue of affordability. Bushnell has never sought to be the most expensive brand with any of its products, only the finest brand that is accessible to all those who seek quality. This, too, is the hallmark of the Trophy XLT. It was always meant to be the scope with the highest quality that was still among the most affordable. Again and again, the comment has been made that this is the best scope for the money. It’s to our great benefit that the Trophy XLT has not only succeeded in being a remarkably versatile scope, but also a product that lives up to the heritage from which it came, a tradition of commitment, quality, progress, and affordability.

While there are not many criticisms to make concerning the Trophy XLT, it should be pointed out that some users found the attached lens covers got in the way as they tried to use the riflescope. It was also noted that the reticle crosshairs are different now than in previous versions of the scope. Thicker than they were before, some found it more difficult to focus on the objective.

The story of the Trophy XLT 4-12 X 40 Riflescope reflects and parallels the story of the Bushnell company itself through these four remarkable characteristics: commitment, quality, progress, and affordability. As is the case of many other economical riflescopes, the Trophy XLT could have gotten away with simply being “good enough.” Just as David Bushnell committed himself to raise the expectations of the world regarding products from the Far East, so those who gave us the Trophy XLT have committed themselves to create an exceptional riflescope.