With a multitude of sports, security, and marine uses, the spotting scope has come into its own as a necessary optic. Tops in quality, the Leica APO-Televid 65 sets a new standard.

To be sure, there are as many spotting scopes as there are uses for them. No single scope can satisfy every potential need. It’s equally clear that fine quality scopes, made with the best lenses and meant for tough environments are well worth the price. There are a few versatile spotting scopes that pass the test of quality and the test of time, superior scopes that serve an array of purposes. In this article we’ll reveal just such an instrument, the Leica APO-Televid 65, to see how it’s made, what it’s capable of accomplishing, and how it performs when compared to other spotting scopes.

Introduced in 2010, the Leica APO-Televid 65 comes from a company whose name is synonymous with superior optics. Known for their outstanding rifle scopes, microscopes, and binoculars, Leica ventured into the world of APO spotting scopes only a couple of years before the introduction of the Leica APO-Televid 65 with their highly regarded Leica APO-Televid 82. These two devices are high end, very similar products. This raises the question, why were they introduced so closely together? What’s so special about the APO-Televid design? Beyond that, in a world full of zoom lenses on video cameras and even smartphones, why do we need spotting scopes?

Spotting scopes have staked out a unique position in the world of magnification optics. Most smartphone cameras have a lens that zooms out to 4 or 5X. The “X” of course means the image in the lens is magnified that many times the resolution an unaided eye can see. Good digital cameras can extend their range to 10X or more. Depending on what it’s used for, a rifle scope might out to about 12X as well. Beyond these distances, handheld optics like cameras must be steadied for their images to be seen clearly. At the other extreme are telescopes that boast the ability to magnify 90X or more, but are primarily useful for gazing at the heavens during the dark of night. 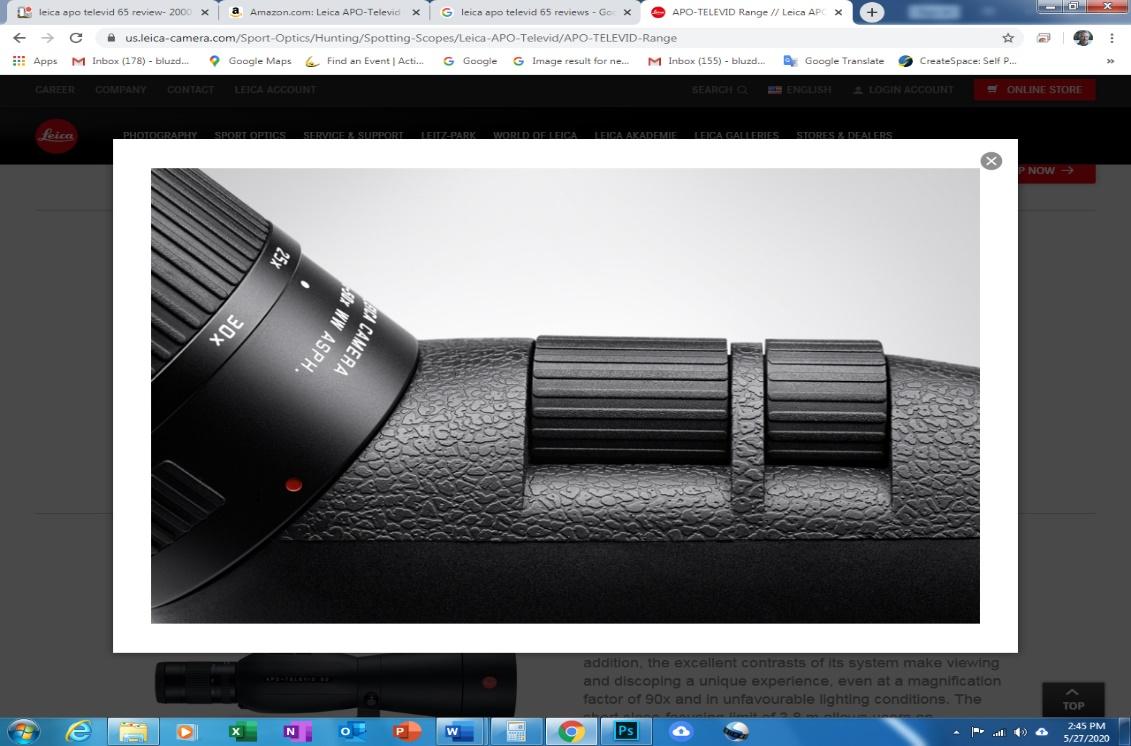 Spotting scopes, on the other hand, have a magnification range that runs from 15 or 20X to 50 or 60X, with higher zooms available through assorted eyepieces. The function of these scopes is to enhance the ability to see minute detail at great distances—to be able to tell the difference between a male and female wren at 1000 yards or to count the points on the antlers of a buck that’s two miles away. As the need for higher magnification increases, so does the need for quality in the spotting scope. Extending magnification from 20 to 50X inevitably results in a loss of resolution regardless of the lenses used and the design of the scope.

There are some spotting scope builders, however, who have perfected the ability to maintain the highest quality of resolution as the highest magnification. The scopes that house these superior lenses and optical systems must be made with the finest quality as well. It does no good to create a perfect lens, then have it rattle loose inside the tube the first time it gets bumped in the field. With these qualities in mind, we recognize that the worthiest spotting scope will be extremely durable, hold sharp focus, and give clear resolution from its lowest power to its highest magnification. There are a good many other variables involved in creating a truly fine spotting scope, as we will see.

What Goes into the Leica APO-Televid 65?

The Leica APO-Televid 65 isn’t the biggest spotty scope around, and that’s by intention. Built with many identical features, this instrument is essentially a smaller version of the Leica APO-Televid 82, which was introduced several years earlier. The Leica APO-Televid 65 is 14.5 inches long and weighs 3.5 pounds. The 85 is longer and, this is key, weighs 1 pound more than the 65. That 1 pound only seems insignificant before having to carry a longer, heavier scope around all day in the field. In comparing the two scopes, the one immediate difference most users listed was that the 65 was easier to carry throughout a day in the field.

The Leica APO-Televid 65 is built on either a straight frame or an angled frame, depending on the preference of the viewer. Most range spotters, birders, and videographers seem to prefer the angled scope, which we are reviewing here. The angled scope is generally viewed as easier on the neck because the user can look down into it rather than holding the head in a rigid position to look forward. It’s especially good for multiple users, who can easily look down from multiple heights. Digiscopers (those who use scopes to take photos and make videos) also tend to prefer the angle lens for stability; the tripod doesn’t have to be raised as high for an angular scope body and is therefore sturdier.

The objective lens of the Leica APO-Televid 65 is 65 millimeters with an eye relief of 19 millimeters. Eye relief is the distance between the eye and the ocular lens. The Leica APO-Televid 65 eye relief is ample, even for those who wear glasses, and the eyecup has four settings for comfort. It’s also important to know that the eye relief is fairly constant as the scope changes magnification. The exit pupil, which indicates the size of the image seen by the viewer through the ocular lens, is 2.6 millimeters at 15X and 1.3 millimeters at 50X. At 1000 yards, the Leica APO-Televid 65 yields a 123-foot field of view. It can “look close,” with a 3 meter closest focus distance. The scope has a dual focus adjustment, allowing either a large, swift focus, but also a fine, slow focus to capture full detail. Among the many accessories available for the scope is a 1.8-millimeter eyepiece that can provide the viewer with 90X magnification. There is a built-in sunshade on the objective lens and also an extra protective glass lens, as with other Leica APO-Televid devices to help protect the objective lens from weather, dust, and scratches. The APO designation stands for apochromatically-corrected systems. These designs use multiple layers of emulsion and fluoride glass lenses to limit the diffusion of light and thus enhance the spotting scope’s resolution.

Made of a magnesium alloyed body, the interior of the scope is nitrogen filled to make it fog proof. Fitted with O-rings, the Leica APO-Televid 65 is waterproof to a depth of 16 feet. Leica provides a 3-year limited warranty and may also give a “passport warranty” of 1 year to cover damage to the scope during normal use. Available for videographers are accessories for the easy attachment of cameras to the scope. Leica also makes a camera specifically designed for this use.

How Does the Leica APO-Televid 65 Measure Up to Other Spotting Scopes?

There seems an almost irresistible urge among spotting scope users to test these remarkable instruments against one another. The Leica APO-Televid 65 is certainly no exception to this. There are multiple reports on the Internet of various groups taking the Leica APO-Televid 65 into the field and testing it against other spotting scopes in the high-end range. Birders, hunters, reviewers, and nature lovers have all reported on their personal tests of the scope. It must be said that there is one constant through all these formal and informal comparisons: the Leica APO-Televid 65 fairs very well, typically being named the overall top choice.

In one comparison, four top-end spotting scopes were tested against one another over a series of field excursions. The scopes were judged on the resolution, color sharpness, performance in different light settings, and clarity at the field of view at all magnifications. In another, there were a dozen scopes tested by a large group using a document that resembled an eye chart with the bottom lines microscopically printed. Among other variables, the scopes were each tested at the same power of magnification to compare clarity. When tested against other spotting scopes, there were instances in which the other similarly priced scopes equaled the Leica APO-Televid 65 in one feature or another, but in each case, the Leica APO-Televid 65 prevailed as the overall best.

The one comparison in which the Leica APO-Televid 65 is truly challenged is against its sister scope, the Leica APO-Televid 85. Though both devices have identical magnification systems and are built with the same degree of quality, the 85-millimeter objective lens collects 20% more light than the 65-millimeter lens. The ultimate magnification may be the same with each scope, but a viewer should be able to see some degree of superior resolution with the 85. This said, all those who compared the 2 scopes indicated they would much rather carry the lighter, shorter Leica APO-Televid 65.

What Are the Pros and Cons of Using the Leica APO-Televid 65 in the Field?

It should be said from the outset that there are few actual reviews of the Leica APO-Televid 65 posted. There are, however, a fair number of users who, having experienced it in the field, commented on their feelings about the scope on the Internet. These comments are overall extremely positive. The most praised feature of the scope is the clarity of its resolution. Many also commented on the true, brilliant colors seen at all magnifications from edge-to-edge of the scope.

Hunters remarked on how much time and travel the scope saved them by enabling easy “glassing,” the systematic, layered observation of the terrain. It was stated that the Leica APO-Televid 65 is the ideal hunters’ spotting scope in part because it has a large field of view at all magnifications. Some individuals pointed out that their assumptions about the best spotting scope were undone when the Leica APO-Televid 65 turned out to be superior to other scopes they had used. Some commented that scopes should not be judged by reputation, but tested first hand. A group of birders who evaluated several high-end scopes reported that hands down, the Leica APO-Televid 65 prevailed through the clarity and color it provided. Though at the upper range of spotting scopes in price, the Leica exceeded in quality all those that were more expensive.

In the area of criticism, one user found the recessed focus knobs to be difficult to use without taking one’s eye from the optical. Another user had difficulty in photographing wildlife in very low light conditions. It was also noted that other, comparable scopes have a higher upper magnification range.

The scope makers at Leica spared no expense in producing a top-flight spotting scope in the APO-Televid 65. Extremely versatile, the scope is rated as the best in its class by birders, hunters and environmentalists alike. Constructed for ease of use, consistency, and durability, the Leica APO-Televid 65 is a rugged, attractive optic that will last a lifetime.