Considering that the bow and arrow have been around for thousands of years, it’s astonishing to think that we could be right in the middle of a revolution in bow aiming and hunting technology. Yet that is precisely what is happening as a result of the pioneering innovation of IQ bow sights and their invention of Retina Lock bow sights. IQ uses the Retina Lock system on all their sights. Now they have improved upon it again with their Pro Hunter Bow Sight. Bow sights feature “pins” in the viewfinder that allow the archer to aim at different distances. The IQ Pro Hunter has a unique pin adjustment that allows the archer to choose and adjust distances individually. In this review, we’ll take a look at this latest IQ innovation, discuss its setup and use, and listen to some comments about it from archers who have used it in practice and the field.

The IQ Pro Hunter is a new sight that only came onto the market in 2018. To say it in one way that is most meaningful to hunting archers, the IQ Pro Hunter has only been available for two deer seasons. Still, it has already had a revolutionary impact on compound bow archers. Previous versions of IQ Retina Lock sights had five or seven pins in the sight. Since the IQ Pro Hunter has only three pins, it might be viewed as a step back or a more basic model of the site, which is incorrect. In simplifying the Pro Hunter, IQ has made it a good deal more versatile as well as unique.

Concerning the technical specs of the sight itself, the IQ Pro Hunter offers micro-adjustment of elevation and windage without having to use tools. There are laser edged markers on the sight to assist in achieving settings for proper distance. The IQ Pro Hunter comes with multiple built-in bow and quiver points. Tape is also included in the mounting hardware packet. This is meant to be fixed so that the archer can sight in and mark distances according to individual distances. The unmounted sight by itself weighs 14.4 ounces. It’s dimensions are 4.5 X 3.5 X 7.2 inches. As to the colors of the three pins, as is often the case the top pin, that traditionally is meant to align 20 yards, is green. The second, or 30 yard, pin is red. The adjustable third pin is also colored green to prevent it from being identified with a set distance as are other colored pins in different scopes.

It’s important to note as well that an advanced IQ Sight Light that fits all IQ bow sights is also available as an accessory for the IQ Pro Hunter. The sight light has an adjustable rheostat that emits a low glare purple light. This can be used in poor lighting conditions, such as fog or dusk, to illuminate the bow sight. The light is threaded and fits directly into the bottom of the IQ Pro Hunter. 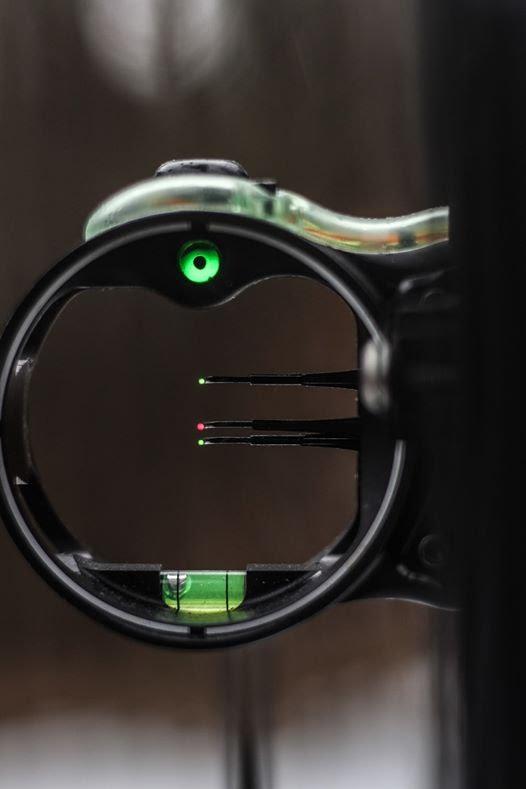 The whole point of a compound bow is to turn a difficult thing—getting maximum forward thrust of an arrow—into a simple thing—using a set of geared cams launch the arrow faster and farther than possible with just a bow and string. Because the compound bow has simplified the difficulty of shooting an arrow—in addition to enhancing the archer’s range and accuracy—we don’t want to make things more difficult when it comes to aiming and shooting the bow. Indeed, before the invention of the compound bow, there was little need for a bow sight. The increased power and consistency of the compound bow made the bow sight a necessity. Therefore let’s make a short, brief list of the steps we’ll follow when using a bow sight like the IQ Pro Hunter.

The first step concerns posture. Make sure to be relaxed and that your knees are not locked. Stand at a 90-degree angle to the target. Your feet should be shoulder-width apart. Second, hold the bow in a relaxed grip with knuckles forward. Ideally, your wrist will be straight, which helps to prevent you from twisting the bow as you draw the string and also prevents your wrist from fatigue. Third, place an arrow on the bowstring and draw the bow to your “anchor points.” Anchor points are the locations on your body where you will consistently, exactly feel the presence of the string each time you draw the bow, for instance, the thumb at the edge of your mouth and the string at a point on your nose. When you feel the string touching your anchor points with each draw, you know that your shots will be consistent. Fourth, if you have a “peep” sight on your bowstring, this is the point at which you look through it and then through your bow sight. Let’s note here that many archers who use an IQ Retina Lock sight do not have peep sights. We’ll come back to the consideration of that in the next section. This is also the point at which many archers close their non-dominate eye, looking through the sights only with their dominant eye. Fifth, align the correct sight pin with the target based upon the distance to the target. In most sights, the top pin is to be adjusted for a target that is 20 yards away, the second for a target 30 yards away, and so on. The IQ Pro Hunter, as we’ll detail below has only three pins. Sixth, while we could simply say, “let it fly” at this point, we should note that there are several other things some archers do before launching the arrow. Because the drawn bowstring may result in twisting the wrist, we may want to look at the levels on the sight to make sure the bow is not slightly turned; if it is, this will dramatically impact accuracy. Other archers “float the pin,” which is to say they relax focus momentarily, allowing the focus to drift and then bring it back to the intended point of impact before firing.

The Advantage of the IQ Pro Hunter with Retina Lock 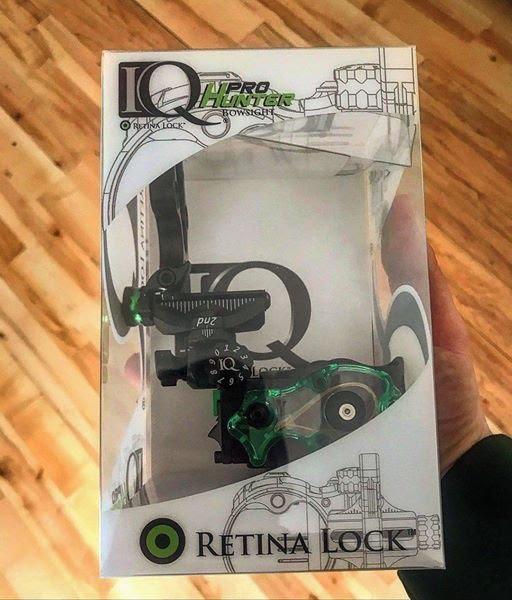 In a sense, the IQ Pro Hunter is like having three or four different bow sights simultaneously attached to your bow. The key has to do with the revolutionary adjustable third pin in the IQ Pro Hunter. With most bow sights, all pin positions are fixed. This gives a consistent, accurate site to the archer only to the extent of the available pin. If an archer has five pins in a sight, adjusted to distances of 20-60 yards, and is aiming at a deer 70 yards away, targeting becomes guesswork. With the IQ Pro Hunter, however, the archer can sight in as many distances as possible all the way to the maximum distance an arrow will carry from the bow. The various distance spots are marked on the tape, so the third pin can be quickly adjusted for the proper distance. This prevents the archer from having to resort to the confusing practice of counting down through color-coded pins. With minimal practice, adjusting the third pin can be accomplished quite quickly. As with other bows, pins #1 and #2 are set to 20 and 30 yards respectively.

Of course, as with any sight, once mounted on the bow, the pins must be sighted in. During the sighting-in process, it’s important to establish a consistent routine, particularly regarding good posture, touching anchor points, and releasing the arrow. To sight in the bow on a pin, make sure to hold the bow steady and adjust the pin to where the arrow struck the target. As with a rifle sight, the high quality of the IQ Pro Hunter allows the archer to adjust for both distance and elevation.

To Peep or Not to Peep

One of the significant advancements of the compound bow was the “peep” sight, literally a tiny circle in the bowstring. When drawn, the archer could line up both the peep sight and bow sight (also called “front sight”) to look through both sights at the target simultaneously. As archers have become accustomed to the IQ’s Retina Lock system, which provides extraordinary stability when targeting the bow, many have decided the peep sight is no longer necessary. The Retina Lock features a balancing dot on top of the sight which functions like the bubble in a level. So long as the dot is kept balanced and the distance pin is on the target, the bow is accurately aimed. Properly used, this system automatically avoids wrist torque and other slight movements that disrupt the placement of the arrow. It should be noted that peep sights can be removed completely from the bowstring, but it’s best to allow professional bow shops to do the work. When you are having this done, make sure to have the bow shop install an “anchor button” o the bowstring. This will make it much easier for you to find your regular anchor points in the absence of a peep sight.

The IQ Pro Hunter in Review

Compared to other bow sights, the IQ Pro Hunter may seem at the higher end of the price range, though compared to the outstanding line of IQ sights, the Pro Hunter is priced in the middle. Available for less than two full years, the IQ Pro Hunter has gained a rating of 4.5 of 5 Stars, with 53% of purchasers rating it at 5 Stars. Interestingly, this sight has no rating by any reviewer of fewer than 4 Stars.

What did reviewers have to say? Several purchasers were familiar with other IQ sights and remarked that the high quality for this designer is known has been replicated in this newest sight. Some expressed the opinion that the adjustable third pin innovation is easier to work with and less tiring on the eyes than the five or seven-pin IQ sights. The precision with which this sight was constructed and thus offers to the archer was also noted. The Retina Lock system, when the IQ Pro Hunter is sighted in properly grants real accuracy. Once accustomed to the sight, it has been noted, greater distance with accuracy has been achieved. While at least one reviewer had difficulty mounting the sight to a bow, others expressed that it was simple to set up, adjust, and begin using.

Despite living in an age of technical advancements in hunting equipment, and particularly in sighting devices, it can truly be said the IQ bow sights embody many revolutionary concepts. With their remarkable Retina Lock system for bow hunting, IQ created a new way to avoid wrist torque errors in sighting bows. Then, with the development of the Pro Hunter, IQ has set the bar even higher for bow sight manufacturers. The IQ Pro Hunter, which includes the Retina Lock balancing system, has a three-pin system for distance sighting. With the top two pins sighted to 20 and 30 yards respectively, the third pin is adjustable and can be moved to any pre-sighted setting. Distance settings are marked in advance by the archer on tape alongside the pins for quick reference.

Those who have purchased the IQ Pro Hunter report that the quality for which the IQ bow sightline is known is retained in the Pro Hunter as well. If you’re serious about bowhunting marksmanship, make sure you check out a quality bow sight for accuracy at distance.