With so many options, it can be hard knowing whether to buy an AR-15 or a hunting rifle. If you find yourself in this situation, keep reading so you can knowledgeably make your purchase!

Odds are, you are in the market for a new rifle, right? We have all been there before. Hunting season is rolling around and your friends or maybe someone in the family wants to prowl out to get this year’s eight-point buck. Maybe you are just looking to drop some rounds down at the local shooting range after work a couple of times a week? No matter what your reasons, you have likely realized that buying a new rifle can be as complicated as buying a new car or home.

These days, if you are looking to buy a rifle, you certainly have more than a couple of options. It is not like when our parents were children and the choice consisted of caliber and make of model. Now, we have to consider whether we should you buy a slick, modern-looking AR-15 or a hunting rifle? Maybe you are not even 100% sure what the difference is.

To be fair, it can be a lot of information at once if you are new to firearms. If this is your current dilemma, it will seem overwhelming when you first walk into the gun shop and stand face-to-face with a wall of firearms. So, for the sake of ease, let’s keep it simple and talk about some of the differences between these two guns you will likely see at the store. Once you have a feel for what make them distinct, you can walk back in ready to expertly make a purchase and leave confident in your choice.

We’ve gathered a few options from both categories for the reader to review, starting with AR-15s and then moving on to bolt-action rifles. With this information, you should be able to get started on your purchase. 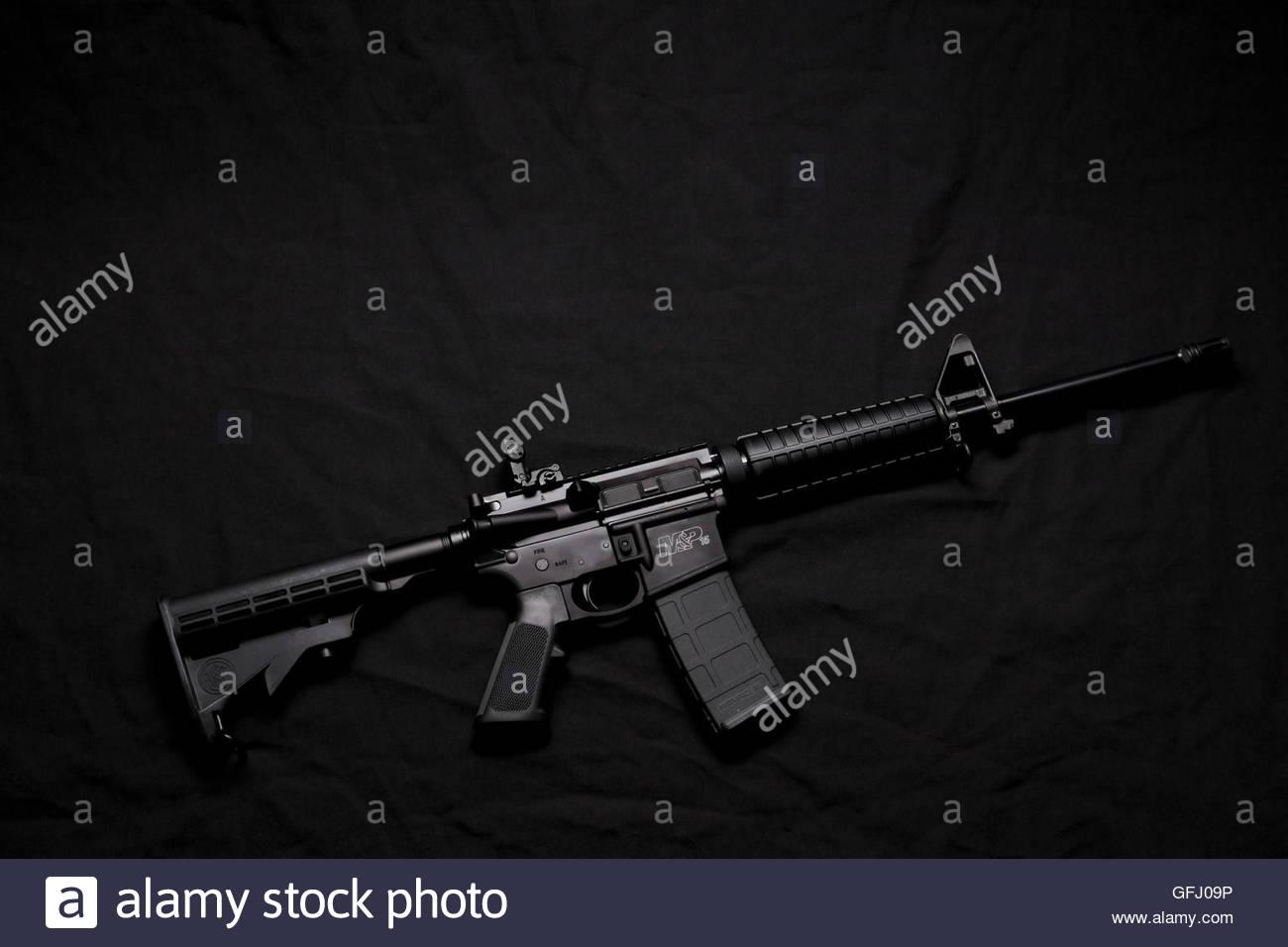 The Smith & Wesson M&P 15 Sport II is a gas-operated semi-automatic AR-15. This means that, rather than having to manually load the next shot, a round is fed from the magazine into the chamber using some of the pressured gas released by the previously fired round. This allows for a faster firing rate than a bolt-action rifle, though not fully automatic.

This is an all-purpose rifle, good for shooting at the range or outdoors in nature. It comes in a matte black aluminum alloy with a polymer handgrip and a six-position collapsible S&W stock, which allows for comfortable shooting no matter the length of your arms. This is also a lighter option than many AR-15 models, at just under 6.5lbs. But, it is still a standard overall length of 35in, with a 16in Armornite barrel.

Listed at $752, this is an excellent starter rifle that can easily be customized with sights or skins such as GunSkins AR-15 Rifle Skin made of premium one-hundred percent waterproof vinyl.

Considering its price and versatility, this is an excellent option for anyone looking to get their feet wet in the world of AR-15s.

Next, we have the Rock River Arms LAR-15 Entry Tactical. A true workhorse of a rifle, this is the same model currently used by the DEA and is, therefore, an upgrade from the S&W M&P 15 Sport II. It holds true to the same gas-operated firing mechanism and standard overall length of 36in with a 16in barrel, characteristic of an AR-15.

It should be noted that the LAR-15 Entry Tactical comes manufactured with A2 front sites and a flash hider. As with most AR-15s, these sites can be improved by adding mounted laser sites, that can easily and affordably be found online, such as Pinty’s green laser sight dot scope with adjustable mounts.

Additionally, Rock River Arms has fitted their rifle with a two-stage trigger, meaning that, when you pull the trigger, it requires two movements fir the gun to fire. This lets the shooter know exactly when the trigger will fire, assuring a safer and more controlled experience.

This rifle is slightly heavier, though, weighing 7.5lbs, but it is fitted with a tactical 6-position CAR stock built in line with the barrel to keep your muzzle from lifting up during repeated firing.

With a listing price of $900, the Rock River Arms LAR-15 may be pricier than the M&P 15 Sport II, but the added shooting life, two-stage trigger, flash hider, and improved stock design make it a solid purchase from which you will get years of shooting. 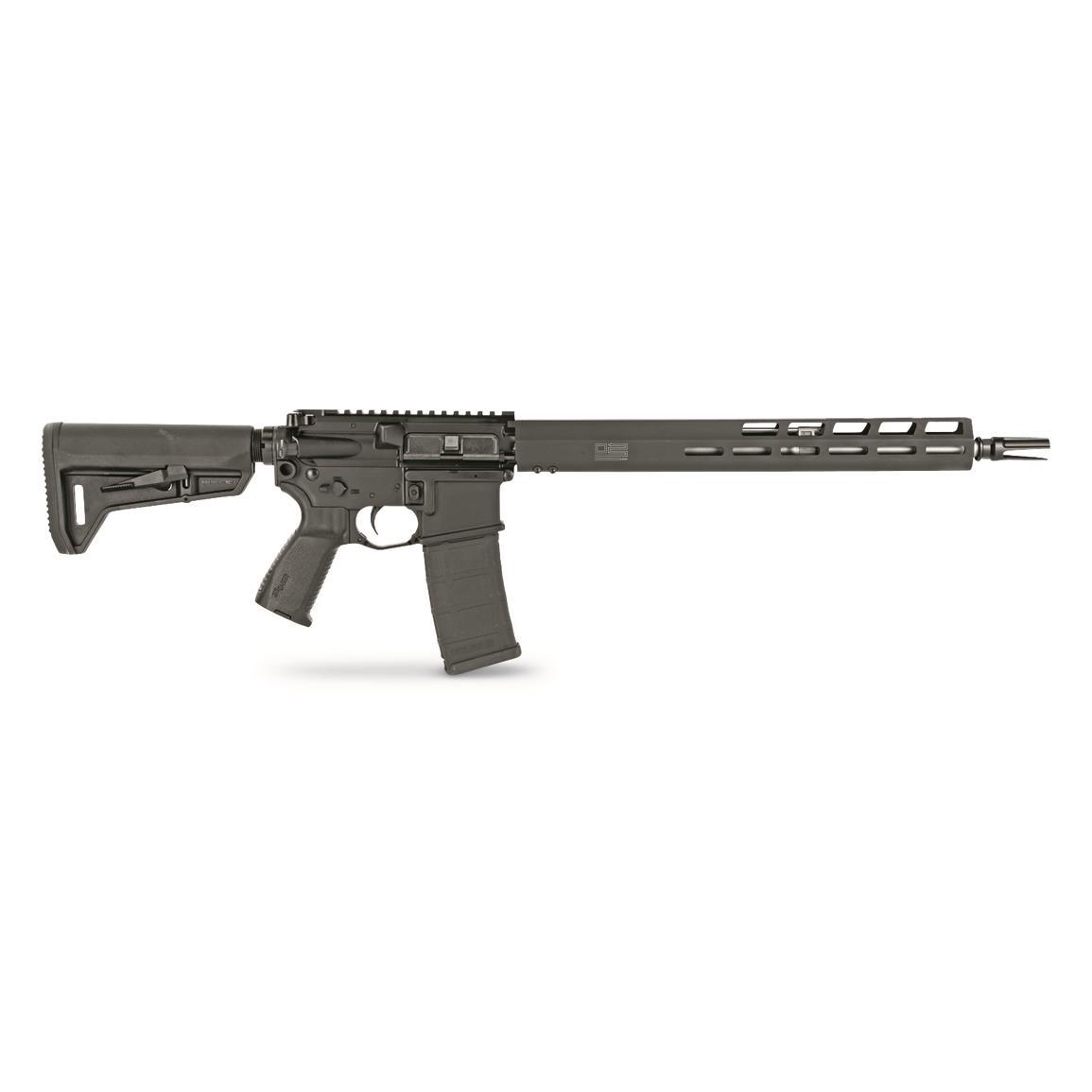 Our final AR-15 is the Sig Sauer M400 TREAD. This is a beauty of a rifle with a lot of versatility. Built with German engineering and featuring a slim handguard, this is a gun you can proudly carry around even your most gun-savvy of friends. Whether down at the range or out in the woods, the M400 TREAD will serve you right.

Keep in mind, though, that at a listing price of $950, this is not a starter rifle. The M400 TREAD fires only 5.56mm NATO rounds but it is equipped with a 1:8 twist barrel to accommodate these higher-pressure, higher-grained rounds.

Though the barrel is a standard 16inches, this is a shorter rifle compared to the previous two AR-15s, with an overall length of 30.8in. It comes factory-made with a 6-position SL-K stock and also includes a very stylish 3-pronged flash hider. Despite not having the same two-staged trigger as the LAR-15 Entry Tactical, the M400 TREAD’s trigger pulls quite smoothly with a trigger weight of only 5 lbs.

The only possible downside to the M400 TREAD is that the site package has to be purchased separately though it may be better to purchase your own custom sites. The benefit of these guns, though, is that they are so customizable. For more information on how to build your AR-15 from its factory-made state, we recommend Rob Reaser’s AR-15 Rifle Builder’s Manual.

The first of these is the Mossberg Patriot. This rifle comes in either walnut or a synthetic matte black body and it has a fluted blued steel barrel. Fluting refers to grooves that are bored from the exterior of the barrel, allowing the gun to cool faster and have a lighter weight.

The Patriot is 42.75in long, 22 inches of which are the barrel. Now, because AR-15 stocks are so customizable, they nearly always come with a variety of positions. This is not the case with bolt-action rifles. The body of a bolt-action rifle is one solid piece so you want to check the LOP (length of pull). This is the distance from the butt of the stock to the trigger. If it is too long, you will struggle to hold the gun comfortably. The Mossberg Patriot has an LOP of 13.75in.

The Patriot fires .308 caliber rounds loaded from the 5-round magazine using a bolt-action lever at a 40° angle.

While not flashy by any means, the Mossberg Patriot is an excellent bolt-action hunting rifle for those looking for a starter rifle. And, at a price of only $370, it is a gun that can be affordably improved with a variety of additional scopes. 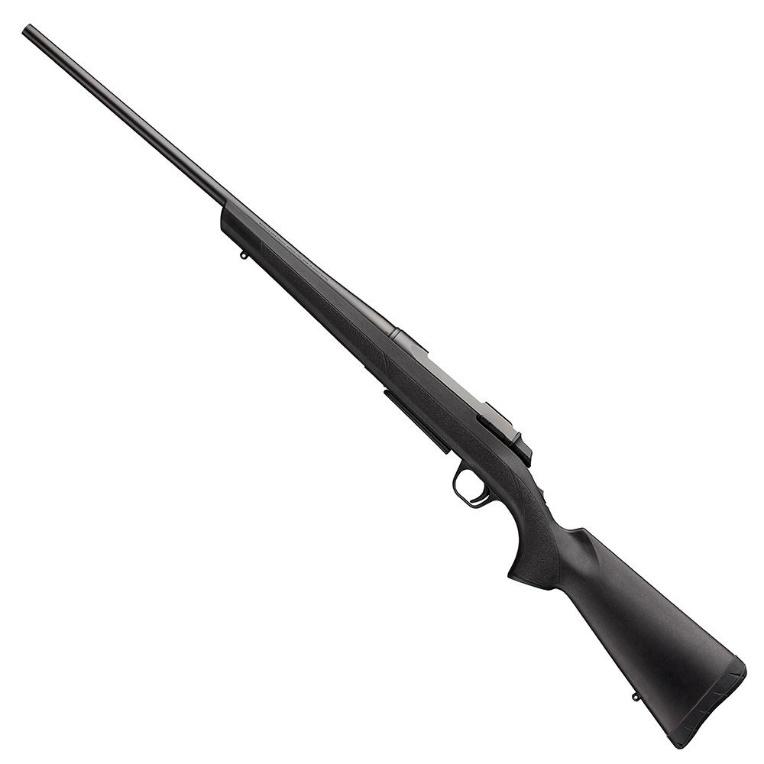 Next is the Browning A-bolt III Composite Stalker, firing a .243 Winchester with a 5-round capacity. Unlike the Mossberg Patriot, the A-bolt III Composite Stalker does not come with a wood option. Instead, it is made of a synthetic composite body in a matte blue finish. The bolt slide is made of chrome and features a standard-length steel action, perfect for mounting a scope. As well, the angle of the bolt lays at 60°, allowing the action to move smoothly, so as not to interfere with a shooter aiming down the scope.

At 42 inches in length, with a 13.625-inch LOP, this is a no-frills gun that some buyers might not appreciate aesthetically. But what it lacks in looks, it makes up for in accuracy and performance. The barrel of this gun is button-rifled, a process that greatly improves the precision of the weapon. It also features a wide trigger guard, allowing the shooter to easily access the 3.5lbs trigger.

This gun is built for shooters who want quick-firing matched with accuracy. Listed at $500, the Browning A-bolt III Composite Stalker is a wonderful bolt-action rifle for anyone wanting to take up hunting or competitive range shooting.

Just remember that it is important to keep your rifle clean and well-stored. After each day of firing, you should be sure to clean the mechanisms of your firearm. It can be easy to misplace pieces if you’re not careful, so be sure to use a magnetic tray such as the one included with Ultimate Rifle Build’s gun cleaning mat.

The last rifle we wanted to share with you is an amazing firearm both in performance and in beauty. This really is no joke. The Remington Model 700 PCR sports a 24in carbon steel barrel and measures 44 inches overall. It comes factory-made with a Magpul PRS polymer stock in a variety of lengths, a muzzle threaded for the possibility of an added suppressor, and it is built from aircraft-grade aluminum. 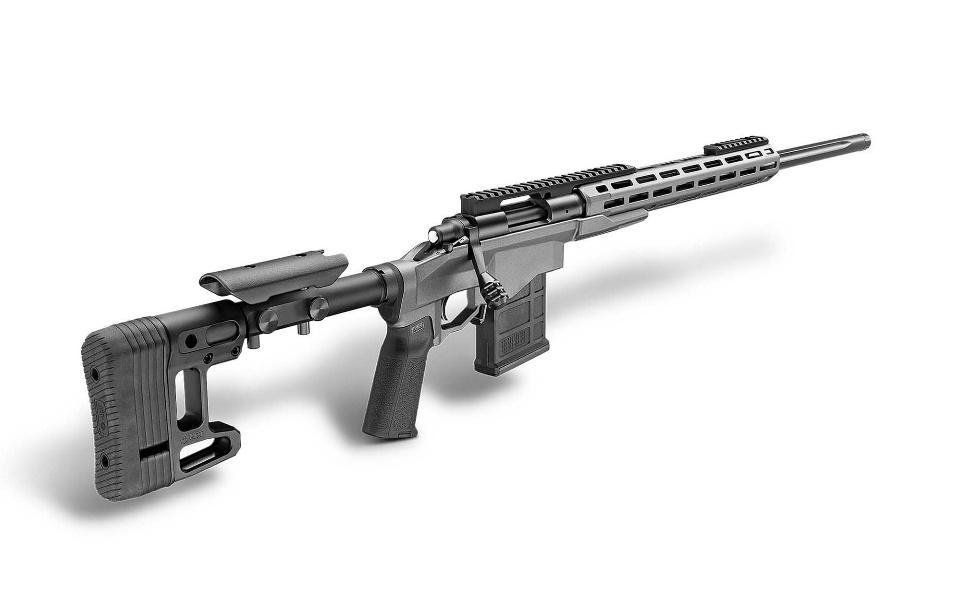 The Model 700 PCR can be purchased in a variety of calibers, including .260 Remington, 6.5 Creedmoor, and .308 Winchester. It also comes manufactured with an adjustable X-Mark Pro trigger, originally weighted at 3.5lbs.

This is a rifle designed for long-range shooting and is perfect for downing large bucks from a distance or competitive shooting. But, with a listing price of $1199, this certainly is not a gun for beginners.

As you can probably tell, the world of bolt-action hunting rifles is pretty wide. If you are interested in learning more about the various makes, models, and history of these classic weapons, we recommend you read Terry Wieland’s Great Hunting Rifles: Victorian to the Present.

So, there you have it! If you are looking for something with a faster rate of fire, a modern and military-ready look, and a larger round-capacity, the AR-15 is an excellent choice for you. If you want something a little slower but more accurate and longer-ranged, a bolt-action hunting rifle is likely the gun you want. Perhaps you want something customizable that you can build up from the manufacturer’s base? Then go for the AR-15. Or perhaps you want a classic and timeless look for your weapon. That’s the bolt-action hunting rifle. At the end of the day, both guns are superb firearms for either the outdoors, competitive shooting, or even just dropping a few rounds with your friends down at the local range! So, armed with this knowledge, you’re ready to go back into that gun shop and make your ideal purchase.